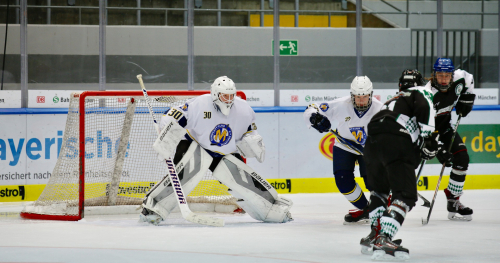 Week 26 is in the books! Tarlunz stays on top, but Rjaward has pushed into second place and Meechen into third, as Holtzlund faltered after winning the Flowering Branch Cup final.

4 Wrischer v. Sajbell 5: Sajbell won with a short-handed goal in the last minute of the game, capping off a wild sequence in the Canal City. With 4:27 left in the third, the score tied at 4 and the Sea Gods pressing Bengt Ambrooderhejm’s goal, Bargeman Boris Vorhees sent 17-year old Antonius Udelhooven hard into the boards away from the puck. Vorhees was quickly whistled for interference, but defender Dieter Schmijtstaff jumped on Vorhees and tackled him to the ground, landing several punches. Udelhooven was taken out of the game, shaken up. Vorhees went to the penalty box with a 5-minute prison sentence and a black eye from Schmijtstaff, and Schmijtstaff was ejected for instigating an altercation. With a 4 on 4 for the rest of the game (5 on 4 whenever Ambrooderhejm was pulled) and the crowd behind them, Wrischer figured to convert and win against the feisty Sea Gods. Instead, Grundel Masur, who has been a stalwart on the penalty kill since coming over from Holtzlund, found a way out of his own zone and sent a pass out to Klaes Gootwen, who returned the favor. Masur skated in, feinted to Gootwen and scored on his backhand. After the game, Vorhees said, “The rookie (Udelhooven) isn’t allowed to say whatever he wants whenever he wants. You don’t respect the opponent, we’ll make you respect us.” Udelhooven denied saying anything to Vorhees or anyone else on Wrischer. “I was out on the ice for eight minutes,” he protested. “I didn’t have time to disrespect anyone.” “I understand he (Vorhees) wanted to send the young one a message,” Schmijtstaff said after the game. “But that was uncalled for.” Sajbell coach Rokus Zwischelstaff suspected it was just frustration on Vorhees’ part that caused him to lose his composure. “We’re skating even with them on their ice and they’ve had a tough season. You go after the new lad who maybe doesn’t have his head on a swivel.”

2 Meenesanne v. Rjaward 7: Rjaward beat up on outmatched Meenesanne. They are now solely focused on winning the championship, and they have a chance, with two games left versus front-runners Tarlunz and 3 winnable games against Onatten, Wrischer, and Bjaward. The only guaranteed road to victory is if they win all five games. Willem "Noodle" van ter Uudl has now taken over the assist lead in the league with 25, while Jens Klijnehoop scored goals number 25 and 26 on the season (including Cup games), a legendary total even at this stage of the season.

5 Bjaward v. Holtzlund 2: The news was very good and very bad for Holtzlund this week. They collected their first Flowering Branch Cup in over 20 years the previous Sunday, but Sybrandy Spillers, the winning goalie, is still in hospital in Staff Borsch recovering from a wound to his calf during the Grand Final that almost cost him his life. Holtzlund had to use backup goalie Schmidt Max, and they were flat and uninspired in the Bull City of Bjaward. The double is going to be tough for them to pull off, as they have 2 tough games remaining out of their 4, Bevinlunz and Meechen at home. And they do not know when they will be getting Spillers back in goal. Bjaward has broken out of its recent scoring slump with back-to-back 4+ goal games. Tor Glenk is back in form with 3 goals over those two games, and two in this one.

3 Meechen v. Onatten 2: Meechen continues to eke out wins and has climbed over Holtzlund into third position for the championship, but now it comes down to schedule and whether anyone can count on the leaders losing a game down the stretch. The Lions’ last four games are all against the bottom quarter of the league except for their Week 29 game versus Holtzlund. Meechen’s Vergilius Vergallus got a goal and an assist in this one, putting a salve on his otherwise lackluster performance this year (4 goals, 7 assists).

3 Bevinlunz v. Sichebach 1: Bevinlunz took advantage of penalties on Sichebach’s defensemen to score on two power plays, and then added an empty-netter at the end. The Merchantmen have been playing better lately and now they find themselves in fifth position, one point ahead of but still four points behind fourth-place Holtzlund.

4 Tarlunz v. Matexipar 2: Tarlunz maintained their grip on first place with a home win over Matexipar before 8,104, their largest crowd of the year. In this game, the incomparable Habel Baarda scored goals three and four to put the game out of reach of Matexipar, who held on to a 2-2 score for the first and much of the second periods. Jan “The Brick” Brichterglad put the onus of the loss on himself, saying that he has not kept consistent focus on his game since the Iron Sticks were knocked out of the Flowering Branch Cup by Dohmatische. "We had higher hopes for sure," he said.

2 Atterische v. Te Staff 1: Te Staff’s inconsistency this year has meant they are good enough to stay in the second quarter of the league, but not to make a move any higher. Atterische, for its part, has shown flashes of good play now and then, and in this game they were looking like settling for a 1-1 tie when a flukey goal got past backup goalie Wob Ramsbeck, in net for a resting Korka. Ramsbeck still made 28 saves and did not get any help from the somnolent Citymen forwards. Atterische’s Rick Rijstad had a goal for his 20th of the campaign.

1 Dohmatische v. Lojren 1: Dohmatische will need to beef up it scoring next year to match its strong defense. An opportunistic center or two who can finish would help them to win some of the lower-scoring games it is drawing or losing by one goal. A quick update for Kai Ganesmund fans. Ganesmund has had a tough time down the stretch for te Lughaus, and his point total of 18 (9 goals, 9 assists) is way down from where he wants it to be. Local media has been suspecting that he is nursing an injury, but Kai is mum on it. The more prevalent rumor is that he is seeking a new contract with a team that has a chance for the Cup and/or Championship next year, as he is nearing retirement age.