The Liminal Zone: outside and inside 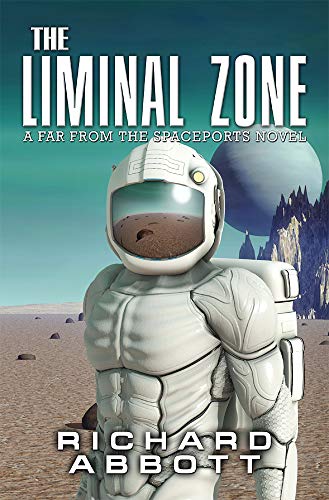 Novels, for me, stand or fall on their world-building. Put a character into a believable time and place, and I’m hooked, regardless of whether the story’s set in the past, present, or future.

The Liminal Zone, Richard Abbott's latest in his Far From the Spaceports series, takes place in the future. How far? A hundred year, perhaps. You never really know. And that’s part of the appeal.

What’s it like to travel to Pluto? To link up intimately with an artificial intelligence personality who is nearly as complex psychologically as you? To have a legitimate chance of discovering extraterrestrial life?

Abbott answers all these questions in The Liminal Zone, and he makes it very real. For me, I could feel the claustrophobia of living inside a capsule, space suit, or space station. I shivered at the glittering cold of the surface of Charon, Pluto’s moon, and I got a little seasick thinking about the low gravity.

And it felt real—though weird and off-putting, as well—to listen to the conversations between the heroine, Nina, and the various “personas” that are part of this future world, and try to envision what type of relationship you could have with, to put it crudely, a computer.

But for all that, there was a lot that was familiar about the people in the novel.

Nina is a researcher of extraterrestrial life who has obtained her last-chance set of grant funding to travel in person to Charon, where a listening post has been set up to look for life on extra-solar planets. It’s not impossible to get there, but it’s still an expensive months-long journey for an up-close look at something that may not be there.

Nina has a hunch, however. It’s about something the staff on the station have called “selkies.” Legends on earth tell of these seal-people who inhabit the waters off the coast of Ireland and have close encounters with humans. The implication is that these selkies in space will constitute humankind’s first contact with extraterrestrials.

So you have Nina, the Don Quixote type, who arrives on Charon to find the station a hotbed of conflicts, drama, personalities, and personas. Anyone who has ever been in any kind of situation with smart people all together in one place trying to accomplish a goal will recognize how things can break down over the unhelpful attitudes of every primadonna smarty-pants who thinks their way is the best.

And everyone is clamming up about the selkies.

Nina’s task, then, involves a lot of subtle manuevering among the various human and AI movers and shakers in the group, in an attempt to get to the bottom of the mystery.

As with most of Abbott’s novels (the other two in this series are here and here), you’re not going to see a lot of explosions, ray guns, swordplay, or “it’s the end of the world as we know it” doomspeak. Instead, Abbott uses his deep understanding of human nature to explore what would happen in a future where outer space is much less about what’s “out there” than what’s inside us.

That’s all you need to know. Tell your personal AI of choice to obtain this book. Then read it. You’ll be glad you did.