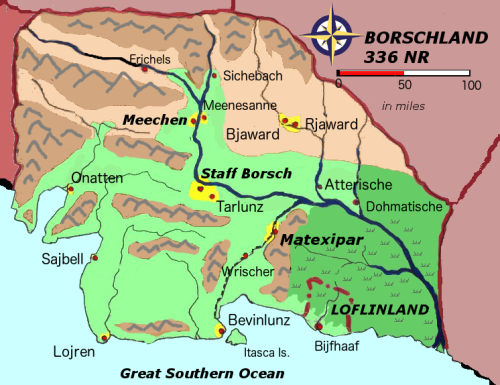 For the first time in a very long time, almost all the home teams in this weeks’ set of games held serve at home, going 7-1-0 overall.

In general, home ice is a pretty good advantage in the Borschland Hockey League; home teams win or tie at home approximately 75% of the time. By contrast, the NHL home ice advantage is only in the mid- to high-fifty percent range.

Image: it's about 225 miles from Erichels to Bevinlunz as the crow flies, about the same as from New York City to Washington DC.

But it’s seldom that all home teams actually win in a given week. This week it was Tarlunz spoiling the home-cooking party with a decisive 4-1 win over Sichebach.

Even though Borschic teams do not have to travel very far compared to their NHL counterparts—the psychological difference between venues is actually very great, since Borschic people are not used to traveling all over the country. People tend to be born, grow up, and die in the same town.

So a trip to Bevinlunz, on the foggy southern coast of Borschland, might be considered quite a trek by, say, a Holtzlund mountain tree-cutter. Here is a map to give you an idea of how far Borschic hockey teams travel.

2 Bjaward vs Matexipar 1: Celebration in the Bull City as centerman Norbert Brunner scored the winning goal with about 7 seconds left in the game, weaving through three Matexipar defenders, dragging the puck behind him and then between his legs and scoring on a scoop just under the bar. There was a brief controversy as Matexipar coach Henrick van ter Tapp disputed that the goal had gone in before time expired, but the chimes in the Bjaward clock tower are notorious for being a few seconds fast. Official time kept on the ice indicated the game was not over.

7 Holtzlund vs Lojren 3: Holtzlund is rivalling Rjaward as the most prolific scoring team in the league, with a largely balanced attack and no true “star” forward. Schmidt Max was again in goal and not tested, stopping 21 of 24 shots. Despite having scored 72 goals this season, the Axe Men have no trinities to their credit. This time they got two-goal games from Dujtrick de Jong and Paul-Frujdrick Henricks.

1 Sichebach vs Tarlunz 4: The Steelmen travel well, with a 4-4-3 overall record away from Staff Borsch, and this week they had an even greater advantage in encountering a Fox Hunter team that is having another tough season. Habel Baarda, Wils Oosterijk, Ditmar Glaackenspujll, and back-from-injury Markus Fvulders had the tallies.

2 Sajbell vs Meechen 1: The biggest upset of the day had the Sea Gods getting a big home win controversially as their second goal was ruled by photo to have passed over the line before defenseman swept it away from the crease. Sajbell goaltender Sybrandy Spillers was the first star of the game with 40 saves. New acquisition Man Grizzlyfaith scored his first goal with a Triton jersey on his back.

2 Onatten vs Atterische 1: Onatten’s home ice has been kind to them: they are 5-3-3 in the Whale City and 0-8-0 away from it. In this game, Onatten’s veterans Laurens van Boom and Gottmar Fvisch provided the goals and battered goalie Cendar Perdath said no on 32 shots.

3 Dohmatische vs Meenesanne 0: A relatively easy win for Dohmatische ahead of their leg 2 match against Tarlunz for the quarterfinals of the Flowering Branch Cup. Grayson Mulebear had the trinity for the roses but, as Bearish custom dictates, declined to give a kiss to any of the rose-throwers but did briefly twirl a lady round on the ice as part of his post-game dance.

3 Te Staff vs Wrischer 1: Te Staff continued its second-half resurgence. This was a total defensive effort on the Citymen’s side, as goaltender Korka made 34 saves and the defending duo of Jeeluj Sudmaas and Gerrit "Castle" te Rook had 7 “true” hits causing Bargemen loss of possession. Overall Te Staff blocked 14 shots as well, all of which took pressure off an offense that scored 3 goals but one on a penalty shot (Chrujstoff Anselm took it), one on a scrum in front of the net (Conraad Gleeph), and one empty-netter (defender Steen Eemerthaaler).