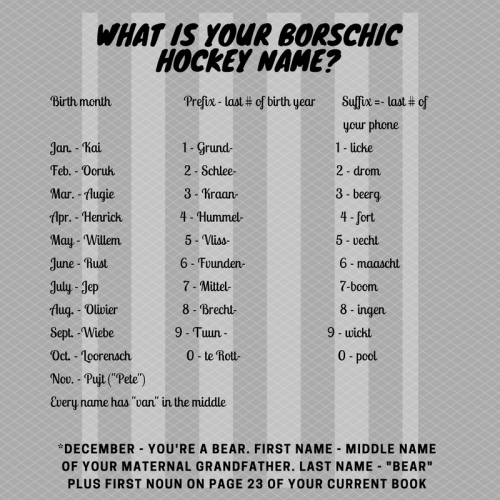 Updated standings! Click in the sidebar to the right---->

The second half of the 336 campaign has begun in Borschland and the top headline is that Meechen has now relinquished sole possession of first place at 10-2-4 and Rjaward's Cattle Drivers have seized the momentum by humbling Matexipar. They are now 11-2-3 and two points ahead of the Proud Lions.

2 Meechen v. Te Staff 3: Te Staff cracked the code of the Meechen home ice victory formula, taking a fluky but well-deserved win in the city of the Lions. Christoff Anselm was back on the ice for the Citymen, taking only 12:45 in playing time but scored the winning goal with 10:14 left in the third when winger Conraad Gleeph flew past Loflin defender Voga Terker on the left side of the ice and sent in a centering pass. Anselm, homing in on goal, was tripped by Terker's pairing partner Raaf Mornengweg as the puck went past him, but he got a stick on it and it deflected under the top bar and into the goal.

4 Bjaward v. Tarlunz 4: Tarlunz earned its point the hard way, pulling goalie August Hoock with 1:54 left in the game and overloading the Bjaward offensive zone with forwards. They got their tying goal at :42 from second-line forward Tor Smeets then had to endure a brief, hair-raising power play when Laurens Kujrke-Delfvt took a penalty for holding. Tarlunz coach Ampte Geert said afterwards, "We will take this point and put it into our back pockets." Tarlunz wins the season series 1-0-1 with a goal differential of only +1. Bjaward got two goals from centerman Norbert Brunner, his first and second of the year.

3 Meenesanne v. Holtzlund 3: Meenesanne held on to its 3-3 draw with 17 minutes of scoreless hockey in the third, blocking 11 shots in that period alone. Holtzlund wanted three points in this game, but they are very much still in the hunt for the championship as Meechen lost its second game of the season and Holtzlund still has lost only three. Zimrothian goaltender Gareth Velnath looked less than spectacular in giving up three goals to Meenesanne’s normally inoffensive offense, but much better than his last outing, where he stopped only 11 of 16 shots. Laurens Noordhall, lately of the Nations' Cup team, had a marker for Holtzlund.

4 Sichebach v. Onatten 3: Onatten’s death spiral continued as Sichebach split the season series with the Longshoremen. The Rams’ pleased the home crowd with 4 goals in the first two periods and then hung on as Onatten made a spirited comeback. Winger Gunter te Krujg had the best goal of the season so far for the Fox Hunters, stickhandling in front of the Onatten net before using a defender as a screen and slipping it past goaltender Cendar Perdath.

0 Dohmatische v. Wrischer 3: Time’s healing hand helped Wrischer while celebration did not help the Dohmatische defensebears returning from their recent Nations’ Cup victory. Dohmatische was flat and uninspired, lacking their normal energy on defense, while Wrischer’s first line picked up a spark, with a score or an assist on all three goals, one by Silvius Silvulus and one by defenseman, Boris Vorhees, both on power plays. The other went to first-liner Korin Kugellicht. Wrischer’s much-maligned defense had an excellent game away from home and picked up the shutout, turning back 22 Swamp Hawk attempts. Silvulus, who had a miserable Nations' Cup with no goals and one assist, said through an interpreter that it was good to get back on Borschic ice. "Sometimes I feel more at home here than in Altium."

1 Bevinlunz v. Atterische 0: Bevinlunz came away with the season series versus Atterische, but without Goaltender of the Cup Heiko Moordfors. Backup Luukas Kolibruj was responsible for this shutout, stopping 21 shots. Christopher Sacrament, Bearish defender whose defense for his national selection celebrated a 1.50 GAA average, anchored Bevinlunz in this game.

5 Rjaward v. Matexipar 1: Rjaward centerman Jens Klijnehoop is going to give Tarlunz' Habel Baarda a run for his money in the goal-scoring department this year. He potted a trinity in this friendly waxing of the Iron Sticks to put his total level with Baarda at 12 for the year. Matex’s backup goaltender Nicholas Untergrujn had a terrible game versus the Lassomen’s dynamic offense. To be fair, the defense let him down more than once, prompting coach Henrick van ter Tapp to say, “There will be a lot of skating in the next practice. I need to get a point across.”