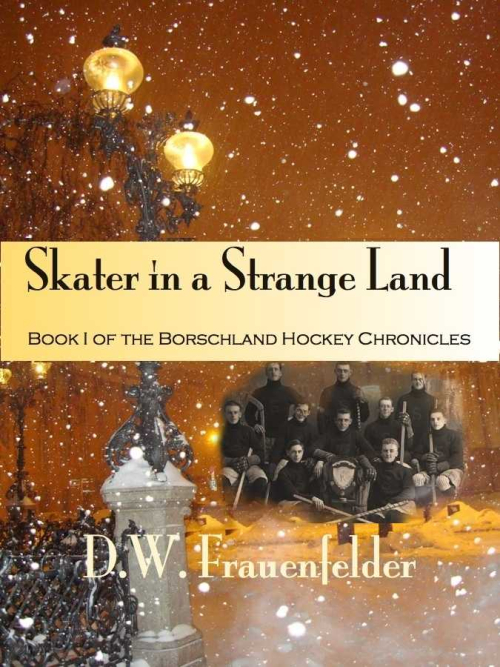 Surprises galore in the final leg of the Flowering Branch Cup 336 Round of 16: the Meechen Lions are out, unlikely victims of the Swamp Hawks of Dohmatische. Two second division clubs move to the quarterfinals, Alma and surprising Ellafuus.

Image: An early draft of the Skater in a Strange Land cover.

Meechen 2 v. Dohmatische 2 (4-3 SO): A huge defensive stand combined with some luck on the Swamp Hawks' offensive side led to one of the most dramatic shootouts in recent Flowering Branch Cup history, but in the end it was Dohmatische shattering Meechen’s chances for a league double (Championship and FB Cup). Meechen’s netminder Welneth Ungarth gave up an uncharacteristic four straight goals in the shootout, while on the other side, Rokus Krenkl was solved three times in a row before finally stopping Doutze Holweerde's bid. Dohmatische's Steen Kaalt, a forward with a grand total of one goal and 2 assists for the season, then stepped up and skated in, waiting for what seemed like forever before Ungarth made a move to the right. Kaalt slipped the puck off his backhand to the left, and the celebration was on.

Holtzlund 7 v. St.-Nicholaas-Meechenstaff 4: Holtzlund unleashed some offensive fireworks in this one and needed every goal, as the Christmas Saints bowed out of their 336 Flowering Branch Cup run with their heads held high. Only the Axe Men’s last-minute goal in the third period stopped a shootout. The 10-9 aggregate score is the best an Open Division team has done against a top league Borschland team in 11 years. Holtzlund's Lourens Noordhall had a trinity of goals against a Christmas Saints team that had to do without their Zimrothian reinforcements. We should see a number S-N-M players in the Borschic top league before long, including forward Thomas Eechstall.

Rjaward 3 v. Te Staff 3: The Cattle Drivers move on to the Round of 8 with a win in this series, aggregate score 6-3. Te Staff had a huge mountain to climb, needing to win by three goals or more to force a shootout. As it was, they played an entertaining game, tying Rjaward in the 15th minute of the 3rd period to salvage a bit of dignity, on a slapshot from distance by Gerrit "Castle" te Rook.

1 Alma v. Sichebach 2: The Mountain Climbers continued to make their case for being promoted to the top league. Although they split the series (with both teams winning away from home and the aggregate score level at 4-4), Alma won on away goals scored, 3-2. Sichebach pressed its case and made the unusual move of pulling its goalie Arnesten Schupink when they were ahead, to win by 2 goals and go ahead in aggregate goals. Though they got off 7 shots before the end, Alma's Vinasolan netminder Sertorius Traianus stood tall.

4 Wrischer v. Ellafuus 4 (2-1 SO): An identical score to Leg 1 of the series meant a shootout, and no one would have bet against Wrischer’s sharpshooters, but Ellafuus goalie Tujrian te Jeester stopped two out of three shots, while Irish international Aedan Macclonough potted the game winner for the Coast Boys. Wrischer's Beenz Grechtlin continued to shine for the Bargemen with a goal and two assists, but it is unforgivable for the defense and goalie Bengt Ambrooderhejm to have given up 8 goals to a middling second-division team.

3 Atterische v. Lojren 2 (2-1 SO): Atterische tried its best to score more than three goals and give up fewer than two in this spirited contest, but in the end the identical aggregate score (5-5) and away goals total (2) meant that the two teams had to go to a shootout. Lojren’s Kai Ganesmund was the only Lighthouser to score in the shootout, after being shut out on points during regulation. Atterische’s Rick Rijkstad scored on the first set and winger Willem Ijstaachter sealed the victory on the third after Ruud Pampujrmoole missed.

7 Tarlunz v. UB - St.-Elisabeth 0: Another easy win for the Steelmen, with goalie August Hoock picking up a shutout on only 12 UB - SE shots on goal. The Ponders go into the quarter-finals confident and firing on all cylinders. The only caveat may be that they have not faced amazing competition in getting where they have (tiny Hijst was their second-round competition). Tarlunz’s tallies included 2 each from Ditmar Glaackenspujll and Radulf Graf, and one each from Habel Baarda, Wolf Eenders, and Roger Sankt-Willems.

4 Sajbell v. UB - Tujrspaarck 2: The Sea Gods celebrated their entry into the quarter-finals amidst a disaster of a regular season. Centerman Klaes Gootwen had two goals, while Franck Hoockertop had two assists.