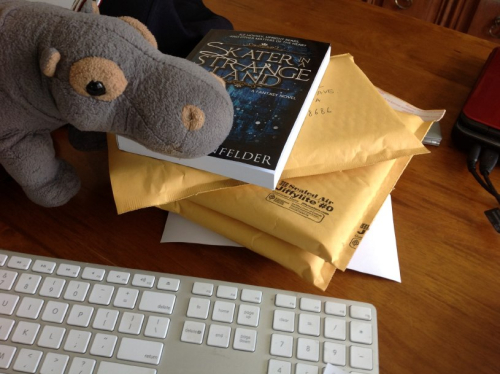 The results are in and it looks like anyone's Cup still for seven of the teams. Only the Alma Mountain Climbers, pushed off a cliff by the Rjaward Cattle Drivers, seem likely to go home after this set of games.

Image: "Grenk," the team mascot for newly-restored Open Division team Genk, presides over the mailing of some D.W. Frauenfelder books.

2 Dohmatische v. Tarlunz 3: The Steelmen will make it hard on the Swamp Hawks coming back to the Staff Borsch suburbs, stealing a win from Dohmatische on hostile ice. What’s more, they had to do it without winger Gerd Luppink, scorer of 8 goals this season with 11 assists. Luppink suffered a lower-body injury early in the first period when he took a tumble off a Clawson Rhododendron hit. “Clean,” commented Tarlunz coach Ampte Geert about the check. Taking his place on the first line was Tor Smeets, who assisted on left wing Pujtr Weeckerstrom’s game winner at 3:12 left in the third. Weeckerstrom is not known for his finishing; previously he had two goals but 10 assists on the year. The other goals were scored by Gerd Hijs-ter Hijde and defenseman Wils Oosterijck. Savujer Ulm and Brock Muller had the goals for Dohmatische. Dohmatische coach Azofer Teekeetl was uncharacteristically quiet after the game, which was witnessed by 7,488 disappointed Swamp Hawks partisans. “Maybe my bears are satisfied with the one cup,” he grumbled. “We’ll see.”

1 Alma v. Rjaward 6: Alma’s hopes for an upset got a rude awakening as the Cattle Drivers broke the Mountain Climbers’ back with a three-goal first period and never looked back. “We’ve gotten a long way and we’re not out yet,” Alma coach Pujtr Groosman said. Rjaward used backup goalie Lemvedeel Schmeechtpujtr in this one, and he was more than up to the job, as Rjaward’s less-than-perfect defense bottled up Alma’s Sjoerd Bommelansch and allowed only 18 shots on goal. Michael Angelbear continued his goal-scoring ways with two markers and was joined by Henrick te Kleerk, Koort Strijker, Gerd Zijterwoode, and Ninujan Glujss.

4 Sajbell v. Holtzlund 4: Schmidt Max was back in goal early for the Axe Men; previously coach Dirk Eechen was going to save him for Week 19 versus , but he had a change of heart just before this game began. Max had a rough day at the Sea Gods’ home rink. Eechen predicted the second leg would not go as the first one had, “As long as we have all our fans with us.” He did not address any goalie controversy. Sajbell rallied for their third and fourth goals in the third period, as Holtzlund held a 3-2 lead after two. The Axe Men's Grundel Masur tallied his sixth of the year with 5:19 left to make it 4-3, but new Sajbell acquisition Man Grizzlyfaith made his presence known in the crease only 1:37 later, screening Max and letting defenseman Davujd van Leeuwen’s shot whistle past him and into the net. Dujtrick de Jong had two goals for Holtzlund.

2 Ellafuus v. Atterische 1: A huge result here. Ellafuus was able to bog down the Atterische forwards and hold them to a single away goal, so they can still lose the next game by one goal and win the series if they score at least two goals. Ellafuus goaltender Victorius Victorillus, who has been brilliant in every round of the cup except for the Wrischer series (2.14 GAA average, 1.20 without Wrischer’s eight goals), stopped 33 Peat Men efforts. Atterische coach Paul Angewejrt finds his team in all-too-familiar territory, down a game with one away goal to their credit, as in the series versus Meenesanne. “Fate does what it does,” he said afterwards. “And this year it seems Fate wants us to prove our mettle at home.”