Round 3 of the Flowering Branch Cup: First 8 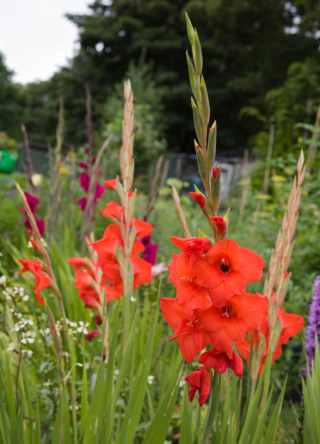 Challenging times for many of the Open Division hopefuls as we began Round 3 today, with Kanaal's win over Holtzlund the biggest surprise. Tomorrow, eight more games.

Image: Borschland's fabulous summer gladioli, a reminder of warm weather as we go into winter.

4 Dohmatische v. Bevinlunz 4: A wild game for both teams ended with Bevinlunz equalizing with only 12 seconds left on the clock. This followed a bizarre sequence where Bevilunz’s coach Florian “The Cleaver” Klavujr protested that an extra minute had been taken off the clock without the officials realizing it. “They tried to steal the game, but we had our own clock going, too,” said Klavujr. “This wasn’t our maiden voyage. We knew what they were up to.” The officials restored 30 seconds to the clock, but that went by without incident before Wulf Nojklaes scored in a last flurry of shorts on Rokus Krenkl’s goal. Dohmatische’s first 4-goal outbreak of the year did not end in a win, and now Bevinlunz’s 4 away goals will be tough to beat back on the Bevinlander shore.

3 Meenesanne v. Atterische 1: Meenesanne took care of business at home versus the Peat Men, signaling they are serious about bringing home some silverware to the Weaver City this year. Helmut Ockschull scored and Henrick Ujsner had two assists for the Weavers. Atterische's Ruud Pampujrmoole scored on a short-handed breakaway.

1 Dafna v. Sichebach 1: Dafna’s inspired defensive stand netted them a tie with a low away-goals score for Sichebach. That means the have to tie Dafna 0-0 or beat them to go into the Round of 16. Dafna's defender Theedy Fraantl blocked 9 shots.

4 Kanaal v. Holtzlund 3: 250. Kanaal obtained a significant win over Holtzlund. With Bram Phauxhall in goal for the Axe Men, Kanaal went out to a 3-1 lead and sealed the win with a long-range shot from defenseman Eernst Kappe (nephew of Wujbe) that was tipped in by centerman Joost van Tijle. Kanaal had not won a game versus a top league team since 330. “We’ll be ready for them next time,” promised Holtzlund coach Dirk Eechen.

Eahnstaff 2 v. UB - St. Elisabeth 7: Eahnstaff did not put up much of a fight at home versus the Techsters. They will have an even bigger mountain to climb when they travel to Staff Borsch, but are looking at a good payout for getting to the third round nonetheless.

Verbrodering-Hammerspujl 3 v. Wrischer 5: The Blacksmiths hung with the Bargemen for two periods plus 17 minutes, but Tomas Scheelgrav broke through with a nifty drive to the net at 2:36 left and broke V-H’s back. The last goal was an empty-netter.

1 Krosstop v. Lojren 7: Visiting te Lughaus took care of business at the mouth of the Borschland River, quieting a record 1,314 standing room only crowd on the rink next to the Bluff. Kai Ganesmund had a goal and 4 assists for the victorious Lighthouse.

0 Retter v. UB-Tujrspaarck 3: The Scholars had enough offense and stifled the Coast Guard Cadets in a game where the Cadets could only manage 15 shots on goal. The University’s top goal scorer, Stareth Vesnar, who had a goal and an assist in this game, will be in the Zimrothian National Selection for the Nation’s Cup at midseason.