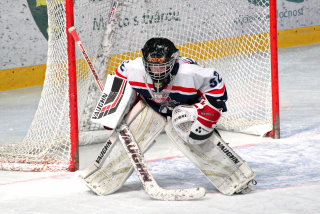 Soon-to-be 20-year old Zimrothian goaltender Gareth Velnath, currently riding an 87-minute unscored-on streak for Holtzlund, has been named #3 goaltender for the Zimrothian selection of the upcoming Nations' Cup of Ice Hockey Tournament to be held in Altium Dacni, Vinasola.

The Zimrothian Association of Ice Hockey Clubs (ZDRT) made the announcement shortly after Velnath's shutout of Te Staff in Staff Borsch.

"We think the young man will make an excellent addition to our team," said spokesperson Startath Ungarth. "He is doing well in Borschland, as we expected."

Reaction from the Borschland Hockey League (BHL) has been mixed. Holtzlund's coach Dirk Eechen took the news as a vindication of the club's decision to bring the youngster to Erichels from Meenesanne.

Officials of the league were less positive. "Carrying three goaltenders is unusual for a national selection," commented Brock Valeentz, president of the BHL. "It is their choice, of course, but I might choose another skater over one's national pride."

Ungarth retorted hotly to Valeentz's comment that "We do everything to win the Nation's Cup of Ice Hockey. This has nothing to do with the recent events in Borschland, embarrassing as they may have been to their league."

Zimroth's National Selection is made by officials of the league in consultation with the King, Unmar the Eleventh, whereas Borschland's is made by popular vote of the members of the Society of Ice Hockey Enthusiasts of Borschland, a dues-paying group. The ballot itself is agreed upon by the owners of the various BHL clubs.

The National Selection ballot will be published later today; the Nation's Cup is scheduled for the BHL midseason break after Week 15 of the regular season.