The geography of fantasy worlds 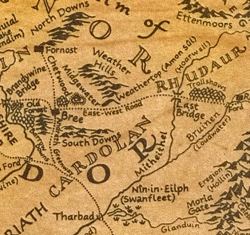 I have a confession: I didn’t finish the last fantasy book I read.

The reason? Among other things, I just didn’t believe the world.

If you’re going to write fantasy fiction, pay attention to world-building. It makes such a difference.

(I know, I know. Everybody says that. But it's harder to execute than it looks.)

In the book I failed to finish, a party of adventurers was trudging through cold, late-fall rain for about three weeks toward the far north of a fantasy continent. The terrain was reminiscent of northern Europe: mountains, boulders, grassland, some forest, almost totally empty of people and towns. They did not meet anyone for days.

In other words, a lot like J.R.R. Tolkien’s Middle Earth.

So imagine my surprise when the travelers finally got to a city and had a civilized meal for the first time in three weeks. What did the meal include?

Peaches, grapes, and an orange.

I don’t know about you, but unless there was some kind of magic-refrigerated-storage-air-cargo situation in that world, there is no way in Iluvatar’s green earth that these three fruits are all going to be in season and on the menu of an ordinary inn in November in a fantasy world resembling northern Europe.

A small detail, you say! If it’s a good story, you can overlook it.

That mistake actually isn’t that small. To me, the author who makes peaches available in the fall in a low-technology world is not envisioning that world as a complete whole.

And that means, often, that the geography of the world—and maybe the whole story—needs more work.

J.R.R. Tolkien’s Middle Earth is a misleading case in point.

The Shire is pretty far north, but it feels like it has a pretty sweet climate, not too hot and not too cold, It’s a place where you can have lawns, farms, and dairy cattle--and it feels safe weather-wise.

In other words, it’s a bit like an idealized south of England.

But the south of England has that type of mild climate because it is influenced by the English Channel, which has a warm current. And in general, if you’re next to sea, the climate will not be as harsh as when you’re further inland.

If you look at the map of Middle Earth, the Shire is actually pretty continental—that is, mostly inland (200 miles inland on average) and mostly next to land rather than sea. The Icebay of Forochel, which we surmise from the name probably has sea ice in it, is only about 400 miles north of the Shire (for comparison’s sake, Anchorage, Alaska is about 370 miles from the Arctic Circle). Strictly speaking, the Shire should have a harsher climate than it does.

Now Professor Tolkien had good reasons for the way his weather worked. Middle Earth is not scientifically consistent with earth’s climate patterns, not because the author was ignorant of them, but because he envisioned his world as a place contested over by forces of good and evil. These forces affect everything, including the weather.

A lot of authors, without understanding this key concept, decide to create a land that looks like Middle Earth. There are mountains and rivers and forests and a sea and hey, yeah, let’s put a city here, a desert there.

This type of it’s-my-world-I-can-do-what-I-want leads to peaches being served out of season in fantasy books and books not being finished by readers.

But anyone who studies geography knows that earth’s terrain and climate and even the shape of land is influenced by a variety of factors. Of course, like Professor Tolkien, you can create your own magical or moral reasons for why oranges and peaches can be served on the same plate. But it’s a good idea to be at least somewhat conversant with the factors that go into earth-like climates.

Here are a couple of for examples:

Latitude: how close to the North Pole is your land? It’s not just about cold weather. Glaciers have a huge effect on terrain, whether they are spreading (in an ice age) or receding (in a warmer age).

Fault lines and tectonic plates: what is the crust of the earth doing near your land? Are two plates pushing into each other or away from each other? Active tectonic plates create mountains, rift valleys, and volcanoes, while adding to the frequency of earthquakes. Island groups tend to be rocky and steep, as they are often formed by volcanoes (like Hawaii).

Proximity to open water: in general, land that is closer to the sea has fewer temperature extremes. But groups of small islands are more susceptible to the effects of sea weather. Small islands and skinny peninsulas tend to be windier and more prone to flooding when they are flat. Ursula LeGuin’s Earthsea trilogy does a good job with creating an island-dominant world.

Go on a Google hunt (here's one good result) for information about geography and climate. I’m a firm believer that those authors who know their fantasy world backwards and forwards write better, more believable, and more salable stories.

In other words, stories readers want to finish.