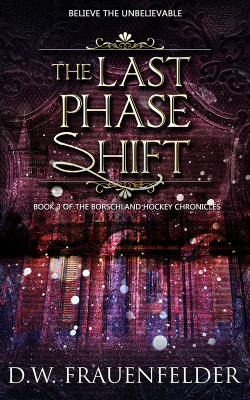 Here at Breakfast with Pandora Books, we like to think we stand for creativity and originality.

So herewith let us inaugurate a new literary genre into the world of fiction: teampunk.

Teampunk is an amalgam of two genres: the sports novel (the "team" part) and steampunk.

Image: Book 3 of the Borschland Hockey Chronicles is available for pre-order.

Some of our readers will be familiar with steampunk, which is the umbrella term for stories set in a fantasy world that resembles the United Kingdom (or some other country) in Victorian or Edwardian times, but with the enhancement of strange, steam-powered, gear-working technology.

Steampunk types like to dress up in corsets and top hats and wear goggles. They write stories about airships (dirigibles, aerostats, blimps) with steam-powered engines. They let their imaginations go wild based on what could happen if history went down another path than the one that leads to the modern world.

Steampunk types are also fascinated with the formal cultural milieu of the Victorian age and with the melodramatic, romantic, and gothic nature of the tales told at that time.

At first glance, steampunk and sports do not appear to be a natural match. There might be an airship race in a steampunk book, but team sports are as non-technological an activity you can find.

And we'd wager that those readers interested in steampunk may not be interested in sports, and vice versa. Steampunk is an ultra-nerd interest. Sports are for, well, jocks.

But the nineteenth century saw the dawn of modern team sports (baseball in the US and soccer in the UK have teams whose pedigrees go back to the 1800's), and sports were extremely important in those days. Who's to say that gears and soccer balls don't go together?

Enter the Borschland Hockey Chronicles, the first known series of books with the Teampunk label.

In Borschland, the inhabitants have deliberately banned the use of petroleum in favor of their native natural resource, superpeat, which, when heated in a furnace, creates a robust amount of energy that can power steam engines.

Borschland uses airships, steam locomotives, and steam heat. They use steam-powered escalators to go up from and down to their steam-powered subways.

And most importantly, they use steam engines to power the cooling machines that create ice rinks.

Ice hockey is the be-all and end-all of Borschland, and ice hockey gives the structure to the tales told about Sherm Reinhardt, the first North American to play in the fabled Borschland Hockey League.

As might be expected, Sherm gets into a lot more than the penalty box. In Skater in a Strange Land, he has to deal with an intriguing and attractive poetess, as well as the rumor that his success on the rink is being engineered for nefarious reasons by higher ups, while in the sequel, The Skater and the Saint, the hockey plot (women's hockey, too) is melded with the disappearance of the Flowering Branch, Borschland's sacred national symbol. In the last book of the trilogy, The Last Phase Shift, Borschland goes off to its first international hockey tournament in an alternate universe, with Sherm's children Conraad, Lily, and Wils as main characters.

We can only hope that there will be much more teampunk in the literary future. We will do our best at Breakfast with Pandora Books to make that happen.