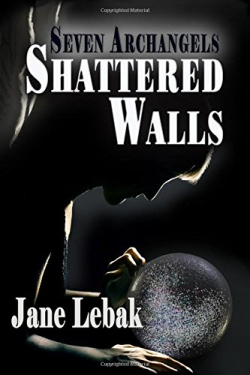 What do you do if you’re looking down the barrel of a storm of Biblical proportions?

Hunker down inside and read a book of Biblical proportions.

This weekend I sent out a social media call for a book to help me cope with a deluge to which I am currently waving a long, unfond goodbye. That book ended up being Shattered Walls, Jane Lebak’s third book of five in her Seven Archangels series.

I am not the biggest heavenly host fan and theologically I find angels and demons edging over into the Manichean, but for a good story they’re hard to beat.

The author herself describes her work as “offbeat fiction for clever readers,” and Shattered Walls is absolutely that. To me, it comes off as ultra-original and yet ultra-familiar, and though the book is set about twenty years after the Resurrection, it also reads as ultra-contemporary with the author’s microscopic attention to psychological, technological, and scientific realism.

Now you might think, is a book going to work where angels make offhand references to neuroreceptors, or say things like “Your stress hormones are pegged”? You might say to yourself, shouldn’t angels be saying King James things like “Be not afraid, for behold I bring you tidings of great joy?”

But on the other hand, why shouldn’t angels be technologically advanced? After all, they aren’t limited by the understandings of humans of any age. They are beings who have spent thousands of years in the presence of God, honing their organization, hierarchies, roles, and effectiveness. Why shouldn’t they behave with the technical expertise and teamwork of a Google project team, and the bravery, fury, and service ethos of the US military, while exhibiting the love, care, insight, and consideration of social workers and clinical psychologists?

All this, of course, along with a genuine, heartfelt dedication to prayer, devotion to God, and to God’s plan for the world.

And the cherry on top: they all have sparkling senses of humor and a penchant for a quip, especially during the worst moments of a crisis.

They're very much what angels are cracked up to be, and I like 'em. They are on the one hand like the best comic book superheroes with a good amount of spiritual depth. There's no reason why this series couldn't be turned into a feature film, except the Christianity would have to be toned down for wider audiences.

Just a little about plot and characters: the two leads are Remiel and Zadkiel, female angels (yes, these angels have gender; Michael and Gabriel are two of the males ones) who are investigating a super-secret weapons project in Hell being organized by a higher-up in the infernal hierarchy, an aptly-named demon named Hastle.

Of course, the infiltration of the weapon’s workshop goes awry and both angels find themselves in unfamiliar circumstances. The race is on to figure out what exactly happened, how it is related to the weapon, and what consequences there will be from the initial snafu. Hint: potentially enormous both for individual angels and for the angel realm.

The climax is climax-y. I enjoyed it.

Big kudos to Jane Lebak for unraveling and weaving back together this highly entertaining and intricate ball of yarn.

PS: I looked for a place online where there might be a discussion of the background of the series and the author’s own thoughts about world-building decisions, but could not find any off the bat. The author might well consider adding a page to her website that gives some insight into how her version of Heaven versus Hell came to being, along with a glossary of characters and technical terms. What exactly was the “Winnowing”? What are the rules for making and unmaking a “Guard”? What is the difference between a “Dominion” angel and a Cherub? Inquiring minds want to know.

PPS: I'm not wild about the cover and I hope my promotion of the book will lead to huge sales that finance a cover re-do. But that's just me.