Half Sick of Shadows (spoilerish) 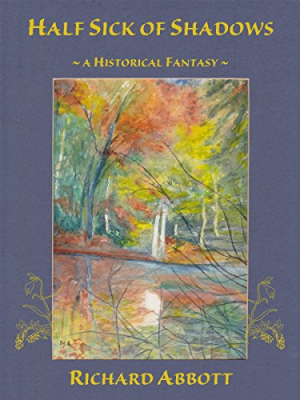 It is really impossible to say anything about Half Sick of Shadows, Richard Abbott’s newest and most creative book, without giving the whole thing away.

So instead of reading this review first, go out and buy the book and read it— I promise, it’s very inexpensive— and then come back and read this.

If you have already read the book and want to know what someone else thinks about it, go ahead and keep scrolling.

Otherwise, I’ll see you in… however long it takes for you to read and come back.

In fact, if you read the book and hate it, I will treat you to another book of the same or lesser value as an apology for making you read Half Sick of Shadows.

Now that we have established I am biased towards this book, and now that everyone is gone except those who have read the book already, the way is clear to say a few spoilerish things. Spoilerish because I know there are a few lingering readers who haven’t gone away and gotten the book, and believe me, you will be disappointed.

First, you don’t need to know that Half Sick of Shadows is taken loosely from the British legend of the Lady of Shalott best known to poetry readers in its version by Alfred Lord Tennyson. It’s a fun curiosity to map Half Sick of Shadows on to the legend-- especially the weaving and mirror parts-- but the story stands on its own.

You also don’t need to know what genre the book is in order to enjoy it. The author says it is Historical Fantasy. I would say it’s Speculative Science Fiction. But it really is its own thing.

Now, for the spoilerish stuff: lately there was a flurry of activity on the internet about alien intelligences and whether we would want them to contact us when it is somewhat more or less likely (how does one decide these things?) that they would be hostile to us.

Stephen Hawking has famously said for years, for example, that if intelligent life outside our solar system tries to contact us, we should act as if we’re not there.

"Meeting an advanced civilization could be like Native Americans encountering Columbus. That didn’t turn out so well,” he is recently quoted as saying.

Also, there's a new short film by a director I admire, Neil Blomkamp from South Africa, about a yuckfest alien invasion that is our worst nightmare. (I loved the film and I don't like yuckfests, by the way.)

But with all due respect to Stephen Hawking and rousing good stories, I think the proposition absurd that aliens advanced enough to travel through space for light years are as callous, cruel, and greedy as Christopher Columbus and the Europeans who followed him.

I find it much more likely that truly advanced aliens would have no need of exploiting worlds they found, but in fact would be more benevolent than we are, having come to the conclusion that survival depends on creating abundance rather than hoarding scarcity.

So far in history, all human cultures that pile up resources at others’ expense have fallen hard after no more than a thousand or so years (the Byzantines did a great job for a long time, but that made the Turks really, really jealous).

But to live through the long haul— long enough to develop viable light-year space flight technology— I think you’d need to find a way to make resources abundant enough that people don’t need to fight over them and kill each other off.

And thus, aliens traveling to earth would know to leave well enough alone.

Unless, of course, they found a way to hang around us without destroying us.

And this is a roundabout way of saying that I think Richard Abbot has that question of alien intelligence absolutely spot on. Half Sick of Shadows is an intricate, delicate story about a Lady who grows through time into something new, both physically and mentally, and how interaction with those she encounters affects that process. But it’s also a wonderfully imaginative take on how we might be-- or have been-- in touch with others outside our ken.

Now is Half Sick of Shadows as fun as Neil Blomkamp's yuckfest with the Texas flag whipping from armored trucks and people exploding and lizard men and squirty goo and methane manufacturing towers?

Yes. Make a movie of it now.

But so few books have that quality of an engaging story that also makes you think. Half Sick of Shadows is one of those few, and it deserves widespread attention.