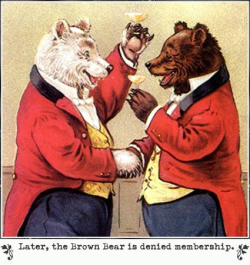 The Borschland Hockey Chronicles concentrates on one thing: chronicles about ice hockey in Borschland.

But there have always been bears as well.

Upright Bears, to be exact.

In Skater in a Strange Land, the first book of the series, our hero Sherm Reinhardt enters the hidden continent where Borschland is located through a phenomenon called Bear Air, an airplane service from a secluded airstrip in the Maldives Islands to Bearland itself.

Or, to hear Sherm describe it:

At the airstrip there were twenty palm trees, a shack, and an old 727 parked out back with a logo that said Bear Air and a bear head with wings coming off of it. The driver left me off with my gear and the first person that greeted me in that shack was a bear.

"Good afternoon, Mr. Reinhardt," he said to me. "The plane is right on time."

I'll never forget that. It was in an accent that sounded English and maybe Jamaican and something else I couldn't place.

That is the moment in the Borschland Hockey Chronicles where some readers step off the suspension of disbelief train. One reviewer, for example, thought that Sherm should've reacted more dramatically to the weirdness of having a bear talk to him. But by that time he (Sherm, not the reviewer) had been flying for 20 hours and in that state you don't react dramatically to anything.

But I think most people can get past the talking bears. After all, most of us have had talking bears in our lives at one point or another. Anyone who's had a teddy bear, for example, and has not heard that bear talk is in a very small minority.

My childhood was filled with talking bears. One of my fondest memories involves the Paddington series of books by Michael Bond. Those were the most comforting things you could read, because they always began with the sentient bear Paddington from "Darkest Peru" creating a vortex of chaos and his ultra-calm, ultra-mature English family doing what was necessary to get him out of it.

As a child with quite the usual amount of chaos in my life-- there were four boys in the family-- that was attractive to me.*

I also had two younger brothers who got connected with a whole community of talking bears and spent most of their waking hours before a certain age going on adventures with them.

Even then I was creating worlds and making maps, so it was just a matter of time before I collaborated with my brothers on a homeland for their bears, which they sensibly named Bearland.

As I got older and the universe that included Borschland incorporated Bearland and a number of other lands (including Zimroth, about which you can read in another of Sherm Reinhardt's adventures), Bearish characters began popping up in my stories. The Borschland Hockey Chronicles wouldn't be what they are without them.

Up to now, all of these bears have been supporting characters. Now, for the first time, I'm publishing a short story where a bear takes center stage. I expect, if all goes well, that this will lead to more and longer bear-dominated sagas.

Josiah U. Bear, the main character, probably owes his origin to my interest in the Tintin series of books, though there is also more than a hint of James Bond as well. Unlike the hockey stories that take place in Borschland in the present day, Josiah's tale is set in Edwardian times (1912 to be exact), when Great Britain has colonized Bearland and many complications have arisen therefrom.

Tintin's adventures have always appealed to me as rollicking tales that are told with resorting to the language and explicit situations that characterize much of popular storytelling today.**

That's why I'm publishing this story in a fantasy anthology with a group of authors who tell tales by choice with at most a PG-13 rating. That group is sponsoring a launch party and giveaway on July 1 and I hope you'll attend-- though unfortunately I cannot be there.

I hope you seek out and enjoy this story. The book is out on June 27 and I would love to hear your reactions at the Facebook party. I'll be sure to read all of the comments and get back to you if you have comments or questions.

*If you are a Paddington fan, you might just catch a reference to that series in my short story.

**Captain Haddock's colorful but inoffensive cursing, a great source of humor, is a nod to the tendency of authors to be enamored of what is sometimes called "adult" language.