How Borschland got its name 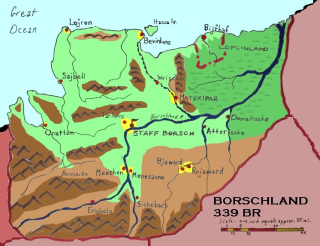 How do authors name things?

J.R.R. Tolkien created an entire mythos as a companion to his renowned Middle Earth series of novels. The names Legolas, Boromir, and Frodo all had linguistic reasons for being what they were, since Tolkien was himself a professional linguist.

Conversely, Christopher Paolini, the bestselling author of the "Eragon" fantasy series, spent much less sweat and ingenuity thinking about the names in his book.

"Eragon," Paolini once admitted, is simply "Dragon" with an "E" instead of a "D."

And what about Borschland, the setting for a story about an ordinary American ice hockey player who becomes, against all odds, a national sensation in his adopted home?

As the progenitor of that name, I guess I'm more in Paolini's corner than Tolkien's, though the story is a bit more involved than the swap of an E for a D.

I was something like twelve or thirteen when Borschland was born. In those days I was prone to create three worlds in a single afternoon. Most of my creations came in the form of maps, and stayed that way. I was a forgetful god, and the inhabitants of those forgotten places would have justly railed at me for not taking care of what I had started.

Borschland was different. It also started out as a map-- the medium of which was markers on butcher paper-- but it soon took on a life of its own.

Borschland's inspiration was the last name of a friend of mine whose father was the dean of an Episcopal seminary in my hometown. My friend lived with his father, mother, and twin younger brothers in an impossible wonder of a house, an on-campus stone-and-brick edifice with soaring ceilings, endless bedrooms, enormous kitchen, and backyard basketball court. It had apparently once been a dormitory.

It was the perfect place for all manner of early adolescent diversion. We played every sport known to man either there or in the quad of the seminary across the street. To play baseball, we used a yellow plastic ball my friend dubbed a "grapefruit." I once whacked that sphere on a rising arc across the quad, smashing a window in the building that acted as the right-field fence.

We also started our own soccer team, and when we could not find a coach willing to train us, my friend's father, the seminary dean, consented to shepherd us until he found a willing divinity student.

That student was the first man I ever knew besides a pirate who sported a gold earring. He was a prince among men to put up with my fourteen year-old diva self.

My friend's mother, the Platonic ideal of mothers, presided over the kitchen, doling out bowls of yogurt and cottage cheese for afternoon snacks, and ferrying us around in the family's white station wagon. Later in life, I had a nightmare that involved being pursued by Satan in a desert wasteland. Presently my friend's mom appeared in the station wagon to rescue me, as ever an angel of mercy.

Since my friend had spent time in Chicago, he had the equipment for street hockey-- goals, sticks, rubber balls used for pucks-- and we played glorious games in the backyard basketball court.

My friend also had a table-top hockey game which I borrowed and played on my own, keeping careful statistics of all goals, assists, and penalties.

With such enrapturing memories stoking the fires of my nostalgia, it was in a way a foregone conclusion that Borschland, which is truly what my friend's idyllic household could be called, would take on a life of its own.

In college I maintained a Borschland Hockey League with teams from all the cities I had created on the map.

Like Tolkien, I became interested in language, and modified the city names to have more uniformity and logic. Borschland's language became an odd combination of Dutch, German, and French, with certain native elements of a land I had named after our seventh-grade science teacher.

Borschland also became the location for a bad short story I wrote about a young man whose mysterious landlady had the odd last name of "Enoon" (hint:  enoon is "no one" spelled backwards), and whose climax took place at an ice hockey game.

Much later in life, I introduced the fantasy ice hockey league to my son, who created a blog around it, and I contributed posts in the voice of a Borschic ice hockey journalist named Kadmus Greningen.

A story thread grew up around the blog posts involving an American ice hockey player named Sherm Reinhardt. You can still read those original posts today.

Eventually, the Borschland Hockey Chronicles, two novels and an anthology of short stories (plus another novel in progress), were born.

Now I have learned of the passing of my friend's father. The generous, genial man who was our interim soccer coach went on to be a revered bishop in the Episcopal Church.

In his obituary, I learned he wrote twenty books, among them two novels.

Much of what survives from an author's imagination seems to be random. Why Borschland? Why ice hockey? What necessitated the birth of that particular story?

But, as the Episcopal priest and author Robert Farrar Capon has written, as Christians we must take what seems to be random and act as if it is, instead, full of intended grace.

Which is why I will always be grateful to the Borsch family for their hospitality, generosity, and for the greatest gift of all: the name of an imaginary world.

Wonderful, David! A lovely gift that keeps giving you so much joy.