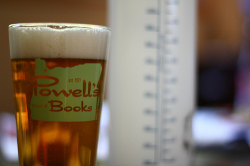 Have you ever heard the term “throughtalking”?

I hadn’t, till the other day.

In fact, Google doesn’t seem to know the term.

This insight, which I love, is spliced out of a post by a Facebook friend. I tend not to have to deal with this phenomenon socially, because I don’t go to high-gloss parties where the movers and shakers move and shake, but I recognize it from my days at professional conferences.

There’s nothing more disheartening than watching the eyes of the person you’re talking to scanning the crowd for someone other than you.

You may be good, but there’s always someone out there who’s better.

My Facebook friend thinks there may be a “throughtalking” trend for beer that’s manifesting itself in online reviews. No matter how high the quality of one craft brew, somehow there must be a better one out there. So proper attention is given to nothing.

I think we can apply this same trend to books, but bear with me for a little on this.

If “throughtalking” beer is a thing, I think it has to do with the sheer number of beers now available. Time was, there were about seventeen brands of beer, and if there was something new, you had plenty of time to taste it and figure out whether you liked it.

I remember in the previous century sitting down in a restaurant near Cincinnati and asking the waitress whether they had any local beers on tap. She looked at me as if I were from Mars.

I wasn’t talking about brewpub stuff. Back in the old days, there were some regional brands. if you were in New Orleans, you drank Dixie. Texas, Lone Star. Oregon, Henry Weinhard’s. Upstate New York, Genesee. Baltimore, Natty Bo. That’s what I was asking for. Even Bud is supposed to taste good if you order it in St. Louis.

But Cincinnati, apparently, had its Waterloo (or Beer-loo) during Prohibition, and never recovered.

Today things are different. I can get thirty kinds of beer brewed onsite in just one establishment.

How am I going to keep up with that?

Maybe, by “throughtalking” beers until I get to the “ultimate.”

Except that there isn’t an ultimate.

Now for the books part.

Independent (small-press and self-) publishing, like craft breweries, has exponentially increased the number of books available, especially novels.

Now, instead of there being a thousand “literary” or “high quality” novels per year, of which ten to twenty were played up by publishing houses and the media, there are tens of thousands that may be good or not. But because there are so many, it’s impossible for anyone to curate them the way we used to when traditional publishing had a chokehold on supply.

For me personally, I seldom buy books anymore. I “try” a lot of them. I will go to the Amazon page and dip into the book, effectively taking a sip. Some of them are just bad or don’t interest me, so I move on.

I want that one that knocks my socks off.

So I end up not buying anything at all.

I am guilty of “throughtalking” books.

The last book I bought was The Bookminder by M.K. Wiseman. It’s a historical fantasy about a teenage would-be wizard set in what appears to be medieval Serbia. I was attracted by the setting and similarity to my own The Mirror and the Mage, and the sample shows that the author has respectable writing chops.

I hope to “drink it down” and give a review soon.

So what’s the upshot of this? Am I advocating, like some, that we should turn off the taps on the book supply?

Should us authors all voluntarily stick to one book per year, to let breathless readers catch up?

I’m still in the more-is-better camp. I think especially of those dedicated book devourers who have benefited the most from the independent revolution. True book lovers always want more.

And I say, give it to them.

And we “throughtalkers” will always be around, and maybe we’ll leave snarky reviews about the few books we actually bought.

But that shouldn’t spoil the party.

So write on, authors. Your readers await.