Why I will never worry about what I write, ever again 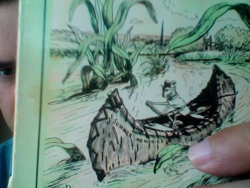 Sometimes when I am in the valley of the shadow of self-doubt about my writing, I think, "I write ridiculous things in my novels. Who would ever believe them?"

One book has talking bears and a parallel universe, another a kind of Pez dispenser that does magic if you know Latin grammar. In my latest book, the hero defends a mystical goal against a hockey-puck-spitting pelican.

But I'm here to declare that I will fear no idea that comes from my muse, ever again. That is because I have just re-read Stuart Little by E.B. White, and I'm going to tell you, he has us all beat.

E.B. White is probably more famous for Charlotte's Web, which has a talking spider and talking pig, but that type of weirdness is nothing compared to that of Stuart Little.

I don't remember reading Stuart Little all the way through as a child, though I'm pretty sure I was impressed by his toy sports car. I just went along with everyone who thought the book was adorable.

Adorable it may be, but it's just straight-up bonkers, too.

Now let me be clear that I'm not dissing the classic status that Stuart has achieved. There's a lot of whimsical fun in the book. It's charming and witty. There is much food for thought and respect and love for those who are different.

I'm just saying what happens in the book strains the boundaries of credulity in a thousand ways, small and large.

First of all, and this has been noticed before, the book claims that Stuart came to the Little family naturally:

When Mrs. Frederick C. Little's second son arrived, everybody noticed that he was not much bigger than a mouse. The truth of the matter was, the baby looked very much like a mouse in every way.

I usually read books before bed, when I'm already sleepy. But this shook me wide awake. I was sure that Stuart had been adopted and was all ready for that fact to be announced in Chapter One.

So Stuart is genetically a Little, but in substance a mouse. Right there, any New York editor would stop reading and have his or her assistant prepare a rejection notice. But E.B. White wasn't a peon from Peoria. He was in the inner circle of the New York literary world, a respected writer for the New Yorker magazine.

So he got a pass.

Stay with me, here.

The bird's name is Margalo, and she is one of those talking birds you see quite often in Manhattan. Margalo is responsible for a number of charming acts, including saving Stuart's life, but she flies the coop (the Littles' Manhattan apartment) when a pigeon writes her a note warning her that a cat is plotting to eat her.

This motivates the action of the book, which is Stuart's quest for Margalo. He obtains his transportation from his friend Dr. Carey, a dentist, who claims that Stuart will be less noticeable as an anthropomorphic animal driving a toy sports car when he activates the car's invisibility function.

When Stuart tests out that function, hilarity ensues, but the author never explains whether Stuart himself will be invisible when he drives the car, or whether he will seem to others to be sitting in thin air being self-propelled, which would definitely be noticeable.

It's actually more astonishing that anyone in this book would think that anything strange would, in Stuart's words, "attract too much attention".

Are you getting the message, here?

I'm going to pass over the charming scene where Stuart takes over a one-room schoolhouse for a day, although I find it highly unusual any school district would allow such an unqualified substitute to teach children.

Then again, maybe that's not so far-fetched.

But I do have to mention the two-inch tall Harriet Ames, a tiny human equally as tiny as Stuart. How does a local storekeeper explain her presence in the world?

"...All of her clothes are specially tailored for her... Yes, Harriet's quite a girl. Her people, the Ameses, are rather prominent in this town."

Harriet almost but not quite makes Stuart forget about Margalo. Clearly, she is a more suitable partner for a mouse than a bird, but their love isn't to be, mainly because Stuart can't get over the fact that his miniature canoe, in which he was going to take Harriet for a ride, has been smashed, presumably by malicious boys, though this is never confirmed.

Finally, and most incredibly for the story, Stuart Little peters out at page 131 in my edition with this sentence:

But the sky was bright, and he somehow felt he was headed in the right direction.

In other words, Stuart never finds Margalo. Not even close. He just drives off into the sunset with the quest still unfinished.

I kept stupidly looking for more pages, as if I'd find another chapter in a hidden trap door of my paperback.

Again, I'd be the first to say, "Whatever! This is a children's book, and in children's books, anything goes. As long as the spirit of the writing is true, children (and adults) will love it."

And so that must be the case with Stuart Little, though I'm going to tell you it creeped me out when I read it this time.

But all of this has taught me a valuable lesson: if E.B. White can write from his imagination and succeed, then by golly, I'm going to write from mine. No more self-censorship, no more self-suspicion. My cup of weirdness runneth over. And I will dwell in the house of--

You get the idea.

Now go out there and write some puck-spitting pelicans into your book.

Image: my selfie with Stuart.