Home Archives Profile Subscribe
...and Breakfast with Pandora Books giveth away...
Why I will never worry about what I write, ever again 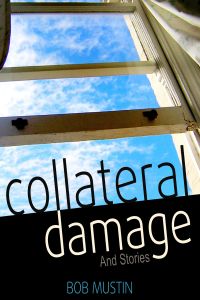 Bob Mustin was last seen in near-future Appalachia, musing on an America gone wrong. That was 2015's We Are Strong, But We Are Fragile.

Mustin is now ranging over new territory. Collateral Damage and Stories, his just-published fiction collection, showcases the author's considerable talent-- for observation, for a well-turned phrase, for sensing the significance of a moment. But it's hardly a solemn affair. There's weirdness, myth, the supernatural, baseball, over-the-top stuff, keenly felt yet wry at the same time.

My favorite story was "Object of Affection," an elegy for Carlos, a star baseball player who has succumbed to Lou Gehrig's disease. It's a simple idea, the memorial for a hero taken before his time, but the means by which it is delivered is anything but. The narrator performs a subtle alchemy throughout, taking the spoken memories of the star's mother and reporting them, through the ether, to the absent Carlos:

The Game. She tells me that by six you were on the diamond, slapping the ball with authority, bouncing it from the child's tee through a maze of soprano crow calls along the red dust infield and onto the grass beyond.

The result is a kind of intimacy amidst loss that is wickedly difficult for any narrative to attain, and a great pleasure to read.

The title novella is tough to get through-- not because it isn't written well, but because it is. The narrator is John, a schizophrenic freelance political journalist. Mustin takes the reader fully into John's skewed perspective and his multiple "figments," characters that pop from nowhere in a jangly soap opera gone wrong. The story, which seems to take place during the first invasion of Iraq in 1991, reads like a "No Exit" type of stage play, with John's house as the set, and with his wife, Janet, his mother, and his teenaged son, Ted, as the characters trapped in hell. "Collateral Damage" refers to that regrettable phrase conjured by the American military during the war, referring to unavoidable civilian casualties. It's an apt metaphor for the havoc wreaked by John's illness as the family battles over the possession, not of land, but of Ted.

If there is a theme to this collection, I would say it is elegy-- all of the stories except for "Collateral Damage" itself have a voice-over quality to them, with a let-me-tell-you-how-it-was storyteller anchoring the narrative. It's a look back over many years, wistful, grief-tinged, but not nostalgic. There is a sense in these stories that you shouldn't ever want to go back to the past, or have things be the way they were. Life was what it was, had its joys and sorrows, and the impulse to tell the story comes not from longing for the lost moment but from the compulsion to declare, "This was significant. It mattered. It bears remembering."

The collection ends with "The Phantom," an homage to a magic baseball that follows its possessor's life, the narrator, and almost but not quite rubs off its magic on him. Could the baseball be a metaphor for writing talent, that phantom that follows us all our lives and changes them depending on the way it bounces here or there?

Well, all I can say is, keep swinging, Bob Mustin. You hit a home run with this effort. Time to get back to the plate.

You're very kind, David. Thanks for a review I wouldn't have dared to imagine for myself.