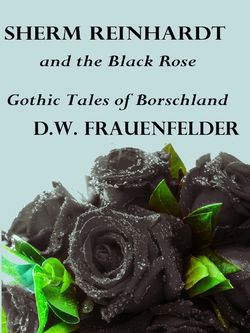 Big news about the Borschland Hockey Chronicles for all fans and future fans of Sherm Reinhardt.

For those familiar with Sherm's ice hockey exploits, Breakfast with Pandora Books has just released a new Tales of Borschland anthology, Sherm Reinhardt and the Black Rose, including the first story involving Sherm Reinhardt since The Skater and the Saint.

Sherm journeys to Zimroth, one of Borschland's neighboring nations, to scout a new goalie for his Te Staff hockey team, but he soon finds out why, as one Borscher puts it, "Going to Zimroth is like going back in time."

There are six other tales in the anthology, each one opening up the world of Borschland in various ways: you'll learn about the Borschic way of romance and Borschic spirituality.

There's also the origin story of the Flowering Branch which is the centerpiece of The Skater and the Saint.

And there are chilling tales as well, one about the Loflins, native people of Borschland, and about why there are no movies in Borschland.

In celebration of the new release, for a limited time the entirety of the Borschland Hockey Chronicles (Skater in a Strange Land, The Skater and the Saint, and the Tales of Borschland anthology) will be available to read for free in the Kindle Unlimited lending library.

And here's an offer for you: anyone who reads one of these three selections and leaves a review somewhere online (e.g. Amazon, Goodreads, your blog) will be among the first to receive, absolutely free, an e-copy of the third and last installment of the Borschland Hockey Chronicles, The Last Phase Shift, which with any luck will be available to give as a Christmas gift this year.

And if you've read this far, then you deserve further insider information, which is that the cover of the Tales of Borschland anthology shown here is actually a beta cover, and if you yourself want to or know someone who would want to design a better cover, please let us know in the comments or email us at teenage underscore heroes at yahoo dot com.