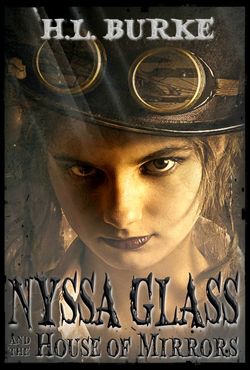 A spotlight for H.L. Burke, who is, for my money, one of the coming author-personalities in indie publishing today. She writes good books, but she's also an engaging person who's fun to follow on social media, especially if you like dragons and cats.

Burke's latest is an attractive YA steampunk novella called Nyssa Glass and the House of Mirrors. The title protagonist is (according to Burke) "a reformed cat burglar turned electrician's apprentice, settled into a life repairing videophones and radio-sets. However, when her past comes calling, she finds herself framed for murder and forced into one last job."

Nyssa Glass has a lot of things going for her, as does the book itself. She's smart, tech-savvy, and tender at the proper times, and Burke has presented for her in this first book of the series a worthy set piece in the elaborately wired and booby-trapped mansion where mirrors are used in an innovative way.

I got attracted to Nyssa Glass because of my Steampunkish series, the Borschland Hockey Chronicles, which is not what you'd call classic steampunk. In fact, I never intended it to be Steampunk, but it sort of fits in the genre.

Burke's take on the genre is similar. She told me in a recent email that she came to Steampunk in high school through the computer game Myst, which has "a definite steampunk aesthetic (gears, levers, goggles)... I'd keep detailed notebooks as I struggled to solve the complex problems and gather clues. I read the 'Myst Reader' which involved a young girl finding an advanced society living under the earth. A society with geothermal power and massive tunneling machines … I really wanted to live there. Well, not necessarily under the ground in D'ni, but in one of the ages Atrus wrote and settled."

Burke says she's read and likes three Steampunk novels that differ amongst themselves quite a bit, first "Romulus Buckle and the City of the Founders ...[which] has a lot of Steampunk trappings, but the world is post apocalyptic and added in aliens … so not completely traditional.

"Then I read Dream Eater's Carnival, because I knew the author mainly. It had some wonderful Steampunk flair, with a circus of rogues and freaks, a heroine who had amber embedded in her arm she could use to do magic, and a carnival performer who may very well be stealing the life force of those around him...

"Finally I picked up Lady of Devices. This was by far the most traditional Steampunk I'd read yet. It had Victorian social issues and a feisty heroine who rises above social mores while still managing to be very proper.

"So between all that, I never had a real guideline for what the genre ought to be, which probably works out for the best. You give me rules and guidelines, the urge to break, bend, and twist them becomes pathological. I tend to write my books first, then find a genre box I can sort of stuff them into rather than write to the conventions of any one particular genre."

For Nyssa Glass, Burke makes several bends in the whatever might be considered the classic Steampunk structure:

"My characters use mostly modern speech. While I appreciate an author who can hold up 'old timey' dialogue for long periods of time, my characters tend to speak to me in whatever voice they darn well want, and I just let them.

"I cheat and use electricity … my characters have computer technology that is way too advanced for your average Steampunk setting. A lot of the story-line features strongly around a character who is a computer, in fact."

That probably would be one of my few objections to this book as Steampunk-- that there is twenty-first century tech in it without being explained by steam and gears.

But there are a lot of stories with improbable technology that people swallow whole, including original gothic works like Mary Shelley's Frankenstein.

Not coincidentally, Burke considers Nyssa "Shelley meets Verne meets Wells, but there's also a taste of the adventure games (such as Myst) that I love so very very much. I hope people can lose themselves in it, the way teenage me longed to visit the Ages of Myst. That's my goal in this series."

I'd say that is the distinctive characteristic of Nyssa, putting the story front and center without a lot of background fuss about worlds and tech. Check out all her other books as well on her website. Dragons abound.

Some other links for the inimitable Mrs. Burke: