"Far from the Spaceports" among Abbott's best

Professionals in the traditional publishing business advise that authors should stick with the same literary genre in order to maximize their name recognition. If your debut novel is science fiction, then your tenth novel (and all the ones in between) should be as well.

I've never liked this stipulation. I've always thought that fans will follow a good author wherever he goes, if that author stays faithful to what makes his books good.

Which is why I'm pleased to report that Richard Abbott's Far from the Spaceports is vintage Richard Abbott, a splendid good read, even if it is science rather than historical fiction, the genre of his three previous novels.

Abbott's work has a characteristic flavor profile: less emphasis on plot, more on character and world development. The action is satisfying enough, but it is never earth-shaking. Abbott does not send his characters off on impossible missions that require multiple dei ex machinibus for the resolution to take place.

This is particularly gratifying for me as someone who last delved into the science fiction genre by way of the movie "Interstellar." Ugh.

The plot of FFTS orbits around a kind of interplanetary economic fraud case somewhere in the future (AD 2100? No year is given), investigated by the one and only Mitnash Thakur, a swashbuckling coding genius who works for the Economic Crime Review Board, an agency I can only hope will be created by a future, benevolent technocratic government.

Sound underwhelming? Well, maybe. It's not going to involve a lot of laser cannons, tempting fembots, and journeys to the center of a black hole.

Instead, you have Mit, who uses computer programming the way Indiana Jones uses his whip. You also have Mitnash's "persona," Slate, a fascinating AI computer who (have to use that pronoun, it's really not an it) combines some of the aspects of the HAL "2001: A Space Odyssey" computer with what can only be termed sexy geek girl partner. Slate is linked with Mit through a neurotransmitter, so "she" can practically hear his thoughts. The result is quite an intimate portrait of hand-in-bot computer sleuthing and hacking.

The world Abbott creates is no less engaging: a set of asteroids in linked orbit called the Scilly Isles, remote outposts used as a base for miners. Think Antarctic Research Station, but without the penguins, or the oxygen.

But the real star of the show may be the hyperauthentic codespeak, which is indicative of the kind of science fiction this novel represents: a reasonable, plausible future where computers and computer hacking are by an order of magnitude more important in everyone's day-to-day life than is now true.

Here's a quick sample from a Slate communication to Mit about an enemy persona:

"Carreg's a very recent model Sarsen, with all upgrades to date, and some custom work done just a few weeks ago. Nothing unusual that I can see, but then I can't access most of the real content across the Pebble interface. Response time is quite a bit faster than I'd expect, but erratic. He's busy doing something else in the background, I guess. There's some kind of Dust code running some kind of daemon service, can't make out what it does. And there could be anything outside his public zone."

It gets more specialized than this, but as with Shakespeare (particularly Henry V, my favorite Kenneth Branagh movie, where you start out with an unintelligible prologue and end with the stirring "band of brothers" speech), the learning curve with the vocabulary smooths out by the end, and enhances the immersion in the world.

Add to this a number of well-drawn supporting characters (including the dashing South Asian spaceship captain Parvati and her partner Maureen, and Mrs. Riley, who is more than just an old lady B&B proprietress), a non-obvious economic mystery to unravel, and an ugly little persona that hacks in to Slate, and you have a nifty and entertaining short novel with much room for further adventures, possibly the best thing the author has done to date.

In short, another bottle of Richard Abbott, perhaps this time a Pinot Noir rather than a Cabernet, but all from the same winemaker and the same literary terroir.

Quail Ridge Books has The Master Mage of Rome series! 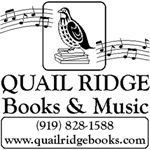 Book II of the Master Mage of Rome series, The Staff and the Shield, has released at Quail Ridge Books & Music in Raleigh, NC. Quail Ridge is also carrying The Mirror and the Mage, the first book of the series.

Quail Ridge Books is one of the leading independent bookstores in the nation and regularly hosts events and readings with the most sought-after authors and national personalities-- people like President Jimmy Carter. Chelsea Clinton will be the next big name on Thursday, November 12.

QRB is also one of the best places to get lost in a very carefully curated selection of excellent books and music.

If you're local, take a visit and support a local business that matters to all of us.