The Flame Before Us: ambitious but not grand 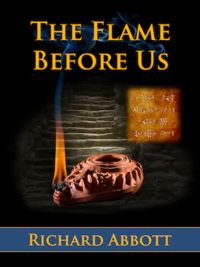 The Flame Before Us is Richard Abbott's third and most ambitious historical novel concerning the Bronze Age Near East.

Previously he treated Canaan (In a Milk and Honeyed Land), then Egypt (Scenes from a Life), to which culture he has a particular sensitivity. The Flame Before Us concerns a wider swath of country and peoples, including Egypt, Canaan, west Syria, and Greece.

The time is 1200 BC, and the situation is dire for the established civilizations on the eastern edge of the Mediterranean Sea. A large group of marauders invades from the west, destroying Ugarit, the west Syrian metropolis, and threatening the Nile Delta itself, as well as Egyptian vassals in Canaan, including the cities of Gedjet (Gaza) and Shalem (Jerusalem).

These invaders are dubbed the "Sea Peoples" because of their preference for using ships as a means of transportation. Scholars have been divided as to where they come from, but Abbott settles on the hypothesis that they are Greeks. He goes one step farther as well and takes them for the Greeks who attacked and destroyed the legendary city of Troy, along with wagonloads of their dependents.

So, ambitious this book is, but in characteristic fashion, Abbott focuses less on sea captains with wind whipping their hair than on what we have come to know after Iraq as "collateral damage:" the ordinary people affected by these events.

To be sure, Abbott can't resist a scholar's interest in the Sea Peoples' ability to defeat conventional chariot-centered warfare. But there are actually zero eye-witness descriptions of large battles. Instead, the on-stage violence, so to speak, is always personal and jarring.

Several threads of characters, two from the sacked city of Ugarit, two from Egypt, two from Canaan, one from Greece, and one of the Ibryhim (Hebrews) form the material for Abbott's tapestry; there are so many characters, in fact, and the historical situation is so complex, that Abbott helpfully includes extensive explanatory notes at the end of the book.

But despite their number and diversity, each set of personages is distinct and vivid in its own way, and helps to create a full picture of what life must have been like in the uncertain times at the end of the Bronze Age. A surprising tenderness in the face of grief, loss, and displacement is the emotion that underpins the action.

I found myself most drawn to Hekanefer, an Egyptian scribe who is attached to a brigade of the Pharoah's provincial peacekeepers. Through vivid, often humorous letters home to his family, he confesses his thoughts about his less-than-desirable fiancée, his deployment to Canaan, and the ability of the army to deal with the invaders. Later, we see him in person, acting as a diplomat to the king of Shalem. He comes off much less the conquering colonial than a rank-and-file (if proud) Egyptian who is trying to make his way in difficult circumstances. Egypt, in Abbott's view, was never the hard-hearted place that the Israelites fled with God's help, but a civilized, tolerant country trying to head off others' political immaturity.

Abbott's treatment of the Greek side of things is less convincing for me. His explanation that a single, charismatic war leader (named Akamunas, Agamemnon for the Iliad fans out there) was able to unite Greece and not only go after Troy, but continue on east along with large wagon trains of women and children seems unlikely to me. Even less plausible is the idea that certain of these wagon trains would "go rogue," so to speak, and take up with the conquered of Ugarit, as one of these does in this book.

Abbott anticipates this objection and gives his rationale in the notes, including ingenious interpretation of archeological finds. My own study of local peoples suggests to me that local peoples stay where they are unless some catastrophic event forces them to do so. Abbott is content to let Akamunas be the motivation.

But regardless of the true situation, history tells us that the strange and unpredictable routinely happens, and the interplay between the clan of "Sherden" Sea People wagon drivers and a brother and sister fleeing Ugarit makes for an absorbing read. Fiction explores where history might dare not to venture.

One last thing about this excellent effort (pristinely published as an e-book, by the way), which Abbott may take as a suggestion for the future: spend more time on material culture.

It is always a historical novelist's dilemma to figure out the level of detail at which food, clothing, tools, and the rest is described. Charles Frazier's Cold Mountain, the movie version of which I reviewed here, is a Civil War novel that goes whole hog: every little tiny piece of anything is named and (sometimes) described. This practice creates a genuine feeling of alienation in the reader-- a distance that says, "You are seeing this story through a telescope."

Abbott's practice is to go light on technical vocabulary, not to examine too closely the kind of chair someone sits in, or the cold meat he or she consumes. This might be because Abbott is interested in keeping the narrative moving. But in a novel like this one, where the scope is necessarily large, the reader will tolerate, and I think, welcome more detail where possible. Abbott's next is rumored to be a sea-faring story-- a perfect opportunity to describe ancient gunwales and forestays, if there were such things back then.

In other words, Richard Abbott, more, more! Your public clamors for it.