Home Archives Profile Subscribe
An opening loss with heads held high
The Flame Before Us: ambitious but not grand

The Mirror and the Mage 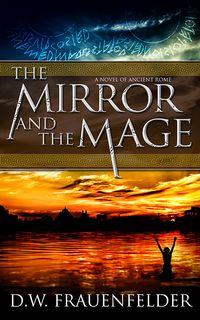 I was pleased to spend a Saturday with the North Carolina Junior Classical League, giving a workshop on Archaic Latin and introducing Breakfast with Pandora Books' newest release, The Mirror and the Mage.

The Mirror and the Mage follows 14-year old Lucius Junius Brutus, who will one day becoming the liberator of Rome and the founder of the Roman Republic.

On the cusp of adulthood, Lucius longs to follow his brother into the army of King Tarquin the Proud, but his father sends him to the remote shrine of Numa Pompilius to be a priest.

Lucius thinks he will spend his life guarding dusty sacred scrolls, but he soon finds out that the scrolls have power-- and powerful enemies. To save the city, Lucius must become a magus magister-- a mage with mastery over spells that work only if the Latin grammar in them is correct.

Standing in his way are the Etruscan haruspices, seers and soothsayers who practice their own brand of magic using mysterious hand mirrors.

In addition to the e-book and paperback edition of the book, there is a beta version of a Roman magic game that you might want to check out here. You can try your hand at "perfecting grammar" (casting spells) and defeating opponents of various kinds.

If you want to be kept abreast of all the news and receive special offers for the book, email teenage underscore heroes atsign yahoo dot com and ask to be put on the mailing list. Or simply click on the "Join Our Mailing List" button at the side of this post.