World-building is a huge amount of fun for a fantasy author, and even more fun when others join in.

My son started a Borschland fan-nation on the delightfully loopy site NationStates.net, and you need a flag as part of the profile, so I designed one for him. Here it is: 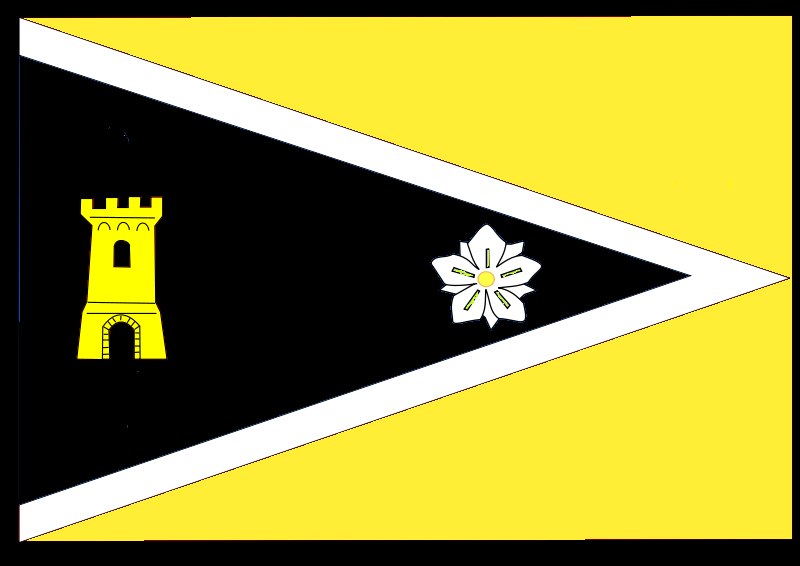 *Dutch readers may possibly see a similarity between this flag and a flag they have seen in the Netherlands. Let me know if you do.

I have known for a while that Borschland's national colors are gold, white, and black. In The Skater and the Saint (p. 147), a Borschland Navy airship is described as having a "gold and black chevron" on the side of its balloon.

The castle inside the triangle represents the old (17th c.) city of Staff Borsch, which was walled against Loflin and Foxian invaders. Its circuit is now followed by a loop subway line, and in most places it is still extant.

The flower inside the triangle represents a flower from the Bloomentwejg, the national relic of Borschland. The Bloomentwejg, or Flowering Branch, blooms every 300 years with flowers that confer immortality.

The colors of Borschland represent light (gold) and shadow (black), which must co-exist for the world to be stable. Saint Willem van Noos puts it this way in The Skater and the Saint (pp. 33-34):

Borschland, through its history has kept a balance of Shadow Saints and Saints of Light...It's not Darkness and Light. It's that light, when it falls on the world, creates shadow, and there is no light without shadow, and by the same token there is no shadow without light.

The white band between the gold and black represents the phase shift, the periodic phenomenon that takes Borschland and its continent into or out of a parallel universe. Note that white is not considered a color of purity in Borschland, but of void, liminality, purgatory, or limbo. This symbolism follows the native Loflin idea that the place of purification for souls after death is the threshold of the phase shift, a place of undifferentiated ice and fog.

The castle and flower in the "shadow" portion of the flag represents Borschland as a nation that, even when "unseen" or "in shadow" (i.e. phase-shifted to the parallel universe), remains vigilant (castle) and full of hope and integrity (flower).

There are other flags of Borschland. Ask if you want to know more about anything Borschic.

Posted at 09:19 AM in Intermission posts, Religion | Permalink | Comments (0)