A new review of Skater in a Strange Land 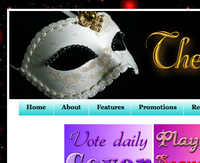 This one is from Mark Lee of the book review site The Masquerade Crew; he gives it the equivalent of 3 stars out of 5, and I appreciate his honesty.

I love that Mark thinks Skater is "unique" and "a nice story underneath the rough exterior." He's less happy about the writing, calling it "sloppy" in places and that "the grammar/punctuation... could have used sprucing up in some places." (Ouch! Would love to hear some specific examples, and how far it goes beyond typos.)

Mark also thinks our hero Sherm should've reacted more strongly to the talking bears. That is a great point and really important for the book. To get into the book, you do have to get over the talking bears-- and the parallel universe, and the fact that no one has heard of Borschland, and...

I think if I were the hero of the book I might have reacted more strongly, but when I try to find a parallel, I go back to my first experience in a foreign country where they didn't speak English-- France. That might have been the most hair-raising experience of my young life (I was twenty at the time). I had studied French, but the reality of hearing it in "real time" was terrifying. Still, I got on the train to Paris and I did what I needed to do. You pretty much have to go with the flow when you're in a foreign country.

Now, Sherm, he's naturally a go-with-the-flow guy-- he doesn't get excited about a whole lot, and I think that's one reason he's able to play a game where there is always a chance of getting your jugular sliced by a stray skate blade.

And anyway, he had nothing to lose, and had been flying for about 20 hours at that point.

But I'm really pleased Mark stuck with the thing and read closely enough to have specific opinions. That's an honor in itself.

Kudos also to the Masquerade retweet crew. Within hours of the review going live, there were bunches of retweets.