A few words about Bearland 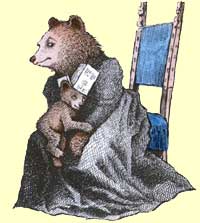 Note: this post is in a series of occasional reprints of articles from Rejsgaang Oot, the magazine of the Borschland National Tourist Board.

The adventurer tourist who has decided on a stay in Borschland may find himself with time on his hands if there is a phase shift that outlasts the traveler's visa.

No problem. The Borschland Foreign Ministry is happy to extend visas in case of unexpected phase shifts.

But what to do until the Continent shifts back to our earth?

If you have had your fill of Borschland, you may wish to visit Bearland.

Image: Else Holmelund Minarik's "Little Bear" strongly approximates the joyful character of the bears of Bearland.

Bearland is one of the most unusual nations on earth. It is the only democratic nation administered by sentient creatures other than humans. Some three million bears of all species make up this truly beautiful and scenic land, and it is well worth the shock to see them and it.

Borschland is home for some bears, especially those who work for Bearland's embassy in Staff Borsch. Having a bear address one with a Gut Emorgenweck ("Good morning!") in one of the city's many open squares and markets is practically an everyday occurrence.

But being in a place where most of the inhabitants are large, furry, and equipped with big teeth can be unsettling for some.

Don't be shy. Bears are among the most civilized creatures on the continent. They have benefited from the influence of English suzerainty (1888-1914) and are still an associate member of the UK Commonwealth of Nations. Though the official language of Bearland is Bnoa, a hybrid of several native bear dialects, English is taught and spoken universally, with only the most rustic of bears having no knowledge of the language. A Royal Air Force base is still maintained by the UK in proximity to Bearland's largest city, Waterbrownbear, with a community of some 750 RAF officers, airmen, dependents, and contract personnel.

The bears of Bearland are proud of their advanced civilization. Most bears wear clothing by choice, although naturism is not outlawed. They maintain a modern network of railroads and highways, and are the only nation on the Continent that uses motorcars as a private means of transportation. Bear Air is the official airline for tourists traveling to and from the Continent.

The climate of Bearland is various. It is the northernmost nation on the continent, which is to say, the closest to the equator, and the weather in Waterbrownbear is similar to that of Auckland, New Zealand. The beaches of Bearland are justly celebrated and visited by hundreds of thousands of bears and humans every year.

Farther to the south, the capitol of Brownbakikio is more continental, and the southernmost city, in the mountains near the Fox Territories, Brownbearking, is surrounded by tall mountains and host to fabulous winter sports.

The "people" of Bearland are among the most hospitable you will see anywhere. They call themselves the "Upright Bears" both because they have evolved as majority bipedal creatures, and because their Bearish Christian Anglican religion calls upon them always to do the right thing in the right situation. The traditional Cathedral of All Souls in Brownbakikio is an awe-inspiring sight with twin Bnoogothic towers reaching to 375 feet and adorned with the unique and glowering bear gargoyles. 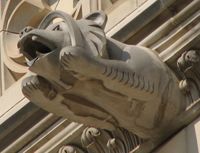 For guests, the Bearish motto translates to loading them down with the national delicacy, honey.

Honey is an ingredient in almost everything eaten and drunk in Bearland, and it is not uncommon to see honeybees flying about in even the most urban of areas. Bears are avid beekeepers and are proud to show visitors their prized hives. Be sure to ask if proper protective gear is available. Most bears do not mind a sting or two, but human hides are more tender.

Bearland is a sport fisherman's paradise. Bears lovingly maintain wild salmon fisheries, and each year the spawning of salmon is host to many salmon swiping festivals. In smaller streams, bears don the traditional waders and fly fish to their heart's content.

Hibernation is a custom now considered archaic among bears, and tourists will find year-round fun and attractions in Bearland, though the winter months tend to be a quieter time of reflection and relaxation for all but the most ambitious of bears.

Sports in Bearland are a great passion. The national game is Sockey, a combination of field hockey and soccer where players score goals both by hitting the small leather ball with a stick-- or by kicking it. Red Dot is Bearland's answer to Australian Rules Football, and is the most rough-and-ready of the native games. Bears also play soccer, rugby, ice hockey, and other more traditional sports.

All in all, there is much more than one phase shift's worth of things to do and see in Bearland. As the bears say, "Bearland: a honey of a place where you'll want to 'stick' around."