The Mill and the Cross, Borschic? 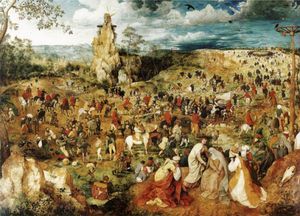 This summer I've taken much time with the second book in my Borschland Hockey Chronicles series, and after a while, everything seems to come up Borschic.

But "The Mill and the Cross," a Netflix streamer we saw at a local museum recently, engaged me both because of its Borsch-ness and its attitude towards faith.

First, about the film.

The movie is about Pieter Bruegel the Elder's 1564 painting, "The Way to Calvary," an oversized canvas that shows the procession of the cross on Good Friday to the hill where Jesus was crucified.

It's one of those European paintings where the artist visualizes the event that happened in Israel centuries ago as occurring in his native land in contemporary times. Which is to say, the landscape looks like Bruegel's native Flanders (northern Belgium and southwest Netherlands today) and the people in it are dressed like 16th century people.

The filmmaker, Lech Wajewski, creates the world of the film by having the painting come to life: that is, the initial shots meld live action with the painting itself, and the painting fades in and out in the same way throughout.

There is no plot per se; the film follows the artist (Rutger Hauer) as he explains his vision for the painting with his patron, Nicholas Jonghelinck (Michael York). The other characters in the film (except for one-- more soon on her) have little or no dialogue. There are a lot of static shots of people staring into the middle distance, and with those shots a lot of quoting of paintings that I have probably seen but don't remember.

The action revolves around the idea that Jesus' death at the hands of the Romans parallels the deaths of Flemish heretics at the hands of the Spanish who had conquered the Netherlands in those days. There is an ingenious melding of the pathos of contemporary people who die for their beliefs, and of Jesus' undeserved suffering and death.

This trailer gives a good idea of what happens in the film, which is not for kids. It's not rated, but it's an R for general earthiness, frankness, and uncomfortableness that is best handled by grown-ups.

How does this relate to Borschland? Among the first settlers in Borschland in the 17th century were followers of a sect called the Familia Caritatis; the beliefs of that sect influence the nature of the Borschic church today. In the film, Nicholas Jonghelinck mentions that he is a member of this sect, which was presumably persecuted by the Spanish, and according to this entry, Bruegel seems to have been a sympathizer of the sect as well.

The patron also says something about the painting, "So, this could be a group of saints returning from the past to mourn the present state of Flanders." He means characters like the Virgin Mary, Mary Magdalene, the Apostle John, and so on, who are depicted in the contemporary landscape of the painting.

I thought about the second Borschland book, which also has "saints" (not Biblical but Borschic) coming back into Borschland, not to mourn, but to try to save the country. 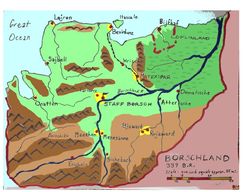 My Borschland books are meant to be fun-- recently it came to me that the adventures are in the spirit of Tintin books, beloved Belgian comic books that I read to my son when he was young.

But the nature of Borschland as a place of moral imagination lies just beneath the surface, and it's something I want to continue to explore.

"The Mill & the Cross" spurs that exploration.

The painter explains in the movie that faith is an elusive thing. It takes work to maintain. People spend so much time just living their lives. The idea of something unseen but yet important is both part of our very natures and yet foreign to us.

So the movie spends a lot of time on showing ordinary people doing ordinary things. And yet, woven into all those shots of kids playing and fighting, women scrubbing doorsills, millers checking the quality of the meal they're making, there is a continuing monologue of the Virgin Mary (Charlotte Rampling) who is contemplating what the death of her son means.

Mary is shown as the archetype of the human being who wrestles with her faith amidst the ordinariness of all the ordinary things of life.

In Borschland, the church has evolved into a place that is quiet and off to the side. Deacons are the practitioners of the faith, praying and giving counsel. People of Borschland do not attend church as a rule, but keep up with the lay traditions of the faith and respect the deacons. There is a sense that the people have made a deal with the deacons: if the deacons will maintain the relationship with God and the saints, then the people will feed, clothe and house them.

So there's a sense that the ordinary has won in Borschland, and yet the presence of the church is always there.

I'm not saying it's an ideal fantasy world for a Christian; I wrestle with my faith daily and I believe God wants that so. But it's a depiction of a situation that I think is true for many people of many religions.

One day it's possible I'll write a book about a spiritual awakening in Borschland. It is a place apart and asleep in many ways. It is a place that comes from that part of me that prefers predictability and resists change.

Yet it is also a place of deep hope and spiritual strength. I'll continue to write in hopes that that comes across in the books.