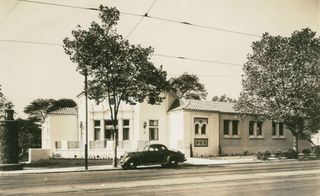 I got my first library card in the third grade, at the desk of a gorgeous old pile of bricks on the corner of Hopkins Street and The Alameda in Berkeley, California. It was an ivy-twined Spanish Revival building that looked like the setting for a novel about kids who get lost in a library that's bigger on the inside than it looks on the outside.

I began to read what that library and my school library had to offer, and I will never forget the day I discovered baseball novels for kids.

Even just one at-bat tells a story.

And it turns out that in the 50's and 60's there was a minor industry of baseball novels for kids. I read as many as I could get my hands on. One of them, "The 1.000 Kid," told a story about a high-school ballplayer who had to make the choice between signing a contract to play minor league baseball or going to college. He manages to get a big-league team to give him a taste of the majors before he makes that decision. After a lot of adventure, he decides on college!

That was a twist ending for this aspiring major leaguer.

Duane Decker was my favorite author, and my favorite book was called "Rebel in Right Field." In this one, a talented young outfielder injures himself by running into the outfield wall trying to make a catch. As he recovers, he finds himself unable to play his normal game because of his fear of re-injuring himself at the wall. I was riveted by the hero's inner struggle to overcome his fear and become the player his talent promised he could be.

Reading for me led to writing, including baseball novels of my own, none of which I finished. "Skater in a Strange Land," which is about ice hockey, is the first sports-oriented novel I've ever completed.

Readers have been impressed with the realism or believability of the hockey in "Skater." "Where did you learn to describe hockey so well? Did you play?" And the answer is no, I never played ice hockey-- though I did play street hockey as a teenager.

I like to think that reading so many baseball novels as a kid trained me, along with all the other writerly skills I picked up along the way, to find the essence of the action in hockey and translate it into the written word.

I still want to write baseball novels, and maybe you'll see one come out one of these years. For now, the Borschland Hockey League is where it's at for me.

But thanks, Duane Decker, wherever you are. And thank you, public libraries everywhere.