Vermeer's Woman in Blue and Borschland

On NPR this morning, much speculation about the subject of the letter that the "Woman in Blue" is reading in Vermeer's famous painting.

The beloved, who is a painter herself, harumphed and said, "I'm sure Vermeer was concerned more with the color of the dress than with the subject of the letter. It was probably his wife reading a receipt."

I went to the NPR site to have a look, and they have a lovely, large .jpg of it that you can click twice and make bigger.

What caught my eye was not the woman so much as the background-- a mysterious map painted on the wall.

I am big on maps and created Borschland first as a place and without any of the people in mind. The ice hockey and the Dutch culture came after.

You can read about the origin of my love of maps here. But what was this particular map depicting? It's blue and beige and from a distance hard to tell. 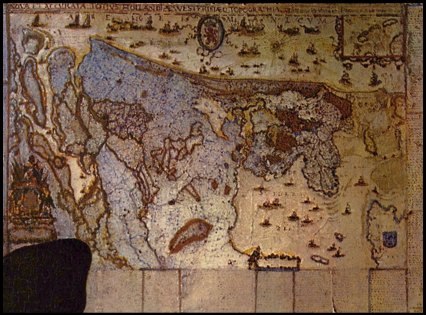 (With humble thanks to the English students at the Universidad de Deusto, Bilbao, Spain, who write an impeccable report in impeccable English)

So off it was to another of the 21st century's best tools, a picture manipulation program. I blew up the photo of the map and saw the words NOVA ET ACCURATA HOLLANDIAE ET VESTPHALIAE TOPOGRAPHIA, which is Latin for "a new and accurate map of the Netherlands and Westphalia."

I also saw the words MARE GERMANICUM in part of the beige section of the map, and what looked like a bunch of ships. Then I realized, like a person who looks at a Rorschach test a second time, that the beige was water, and the blue was land. MARE GERMANICUM means "German Sea" and is an old name for the North Sea.

I rotated the picture with the manipulator program, and hey presto! the Netherlands was staring out at me.

Compare this with a contemporary map of the Netherlands: 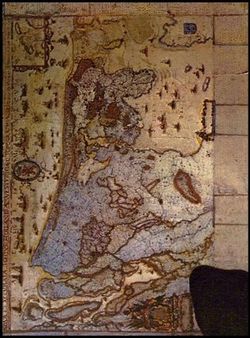 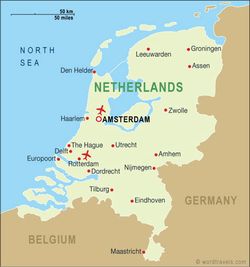 What does this have to do with Skater in a Strange Land? Not much, at first, but follow me into the wilds of my imagination if you dare.

Vermeer painted in the 17th century, which is also the century when Borschland was discovered. It was an age of great exploration, and the Dutch were some of the most adventurous sailors out there, including a guy named Abel Tasman, who discovered the Australian island of Tasmania.

I imagined Tasman also discovered the mystery continent where Borschland is located while on his way to Australia, since the Continent is fairly close to Australia. In fact, I wrote a short story about Tasman and the two captains, Willem van Noos and Henrick Lojren van Borsch, whom he left behind to map the Continent. You can read the opening of that story here and buy the whole thing if you wish. If you've read this far, you can even ask for it from me for a gift. First three askers who comment (and send their email address to teenage underscore heroes atsign yahoo dot com) get it.

That short story will be helpful background reading for my next novel, The Skater and the Saint, which hopefully will be published around Thanksgiving of this year (2013).

I love that Vermeer included a map of the Netherlands in his painting, with all the tiny ships on it that indicate the Dutch commitment to expanding their horizons. Borschic folks have a little bit of that adventurous spirit still, which makes for a fun place in which to set adventurous stories.