Recently I left a comment on Dean Wesley Smith's blog reiterating in a tongue-in-cheek way that indie (self-) publishing is a gold rush. In his next post, Smith wrote this:

So I have a few start-of-the-year suggestions for indie publishers:

1... Stop thinking of this as a gold rush. We are now in the new normal.

For writers and publishers like Smith, this line of reasoning rings true. He is a publishing veteran with dozens of novels under his belt. His publishing company, WMG Publishing, has equipment, employees, and tons of momentum.

But to continue with the gold rush metaphor for just a bit longer: Smith is no longer a solitary panner working a claim. He is an established mining concern with a big heap of placer behind his sluice box.

In that respect, for him to call indie publishing the new normal is the result of looking in the mirror. For him, the gold rush is over. Now he is simply running a business.

For the individual writer, however, indie publishing still resembles a gold rush. More and more writers are staking their claims in the literary fields, digging for a finite number of readers. Even to get to the fields to prospect, you need to have done a lot of work, and to have spent some money. Like a forty-niner who had to travel to California or a sourdough to the Klondike, the writer has to have a commitment, an investment, and infrastructure. You start off with a rapidly-dwindling stake that you're hoping to win back someday.

Also, as with the real gold rush, those who offer the services to writers-- instruction and coaching, editing, cover and interior art, publicists and promotion-- these are the folk, like the grocers and outfitters of long ago, who make the reliable money. The writers mostly make nothing.

(Smith, by the way, offers seminars on self-publishing and sells books on the subject. So he's not only a miner, he's also a dealer, vertically integrating his business. Smart man.)

Gold rush or not, the individual writer looking to succeed in publishing still needs to figure out what to do. Smith offers methods, and tons of useful information on his blog. But he focuses on the individual.

Here's something in which I'm currently investing: a writer's co-op.

A writer's co-op is more than one individual trying to struggle on his own, and less than a traditional publishing company that takes most of an author's rights and royalties. In the co-op, members buy in with an investment to a joint name, website, and mission. They

and whatever else they all agree to do. Based on their mission, they can keep individual proceeds, websites, and even publishing companies separate, or go all in together. They also can decide whether or not to add members or take on the bigger job of publishing from submissions. It's not a publisher-- it's a publishing co-op.

I do not know of any successful writer's co-ops yet, and I suspect the idea is still a new one for 95% of writers. But the idea makes sense to me, and I'm going with it.

I am the type of writer who works best when I know someone's already out there waiting for me to push that content out. And I don't yet have a bunch of readers waiting for the sequel to Skater in a Strange Land. So working with colleagues makes sense for me.

And it makes the endeavor a lot less like a gold rush, and more like a civilized endeavor. Something we should all hope for, even if you don't read this hair-raising Wikipedia article about the negative effects of the California gold rush. (Seems to me we're overdue for a high quality TV series with a more realistic view of this incredible time in history.)

One more thing from Smith that helps to drain the gold rush metaphor of its relevance: he claims that, unlike gold, readers are in huge, huge supply, especially internationally:

Exclusive, no matter in what form or for what reason, is your enemy in this new world and this new year. The world has become a place to sell in hundreds of different markets and forms. Distributors (both paper and electronic) will try to rope you into exclusive agreements. Don’t go for any of them. And don’t let a traditional publisher rope you into a contract that will force you to write only what they want when they want it. The phrase for 2013 should be “Spread Out.”

In other words, our claim is not a 6x6 square next to the Feather River up in the Sierra Nevada. It's the entire blessed world.

So take heart, you literary forty-niners. That mansion in San Francisco isn't as out of reach as it seems. You just have to work your tail(ings) off. 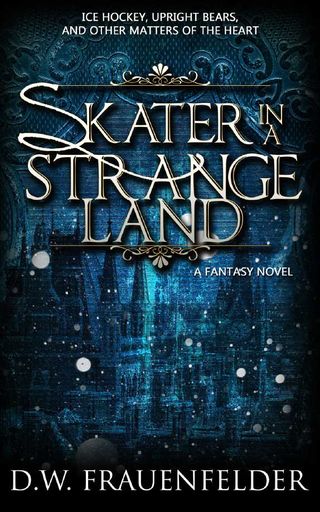 Big thanks to the Haddixes and Streetlight Graphics for doing the work on Skater's cover. I asked for a cover that had some Steampunk elements but would go light on corsets, blimps, and gears. The metal frame around the blue background really did the trick.

Then the classic buildings with snow in front gave a feel of Borschland in winter. The color palette of blue, white, and grey felt very right for this winter's tale. In fact, I was inspired by one of the covers of Mark Helprin's 1983 novel, Winter's Tale.

That novel, a fantasy about New York City at the turn of the 20th century, feels similar to Skater; so does John Crawley's Little Big. But both of these are more ambitious and classically literary. I am impatient both as an author and as a reader. I like my stories less sprawling.

Very proud to announce my appearance on the Phil Naessens Writers Showcase Podcast. Besides reading from Skater in a Strange Land, I had a blast telling Phil, among other things, what three books I'd take to a desert island.

Phil also asked what authors influence me today, and I regret not remembering to say Jack London. I'll have a post on that soon.

It was a great pleasure to talk to Phil and discuss the book with someone who liked it, and I got some substantial insight from him as a reader to an author.

Besides being an avid reader with a writer's podcast, Phil hosts a sports show and is a sports guy. He has a popular Internet radio talk show where his substantial sports knowledge is on display. Phil is also the owner of and resident professional at an American Tennis Academy in Corfu, Greece.

So it probably shouldn't have come as a surprise to me that Phil's favorite part of Skater was the characterization of Skater's hero, Sherm Reinhardt, and the description of the Borschland Hockey League games in which Sherm plays:

Skater in a Strange Land, apart from the talking bears, foxes, phase shifts and the like could actually be written about any average athlete with dreams of playing in the big time... Sherm leaving home to travel to Borschland in order to further his career is a journey many of us have taken and I felt a certain kinship with him... Frauenfelder was spot on with the vernacular of a pro hockey player and his description of the hockey games in Borschland made me feel like I was actually watching the game in real life.

Nevertheless, I was surprised, and I think I was surprised because all of the readers of the book to this point have focused on other things besides the hockey and the sports angle. My writing colleague Bob Mustin, for example, wrote in his review of Skater that "I think of hockey like I think of pro wrestling." In other words, not too highly.

I've had fantasy readers enjoy the book, and romance fans have something to cheer about as well. But Phil was the first reader who comes from a sports perspective.

So, I am reminded again that every reader comes to a story uniquely. And that good literature works as a mirror, helping readers to see themselves in another person's story. I hope that Skater is good enough that every reader will come away from the book with a sense that it spoke to them personally. Beyond that, like Sherm Reinhardt, I'm just happy to be in the game.